A Lover's Challenge, and Scenes from my Morning Walk 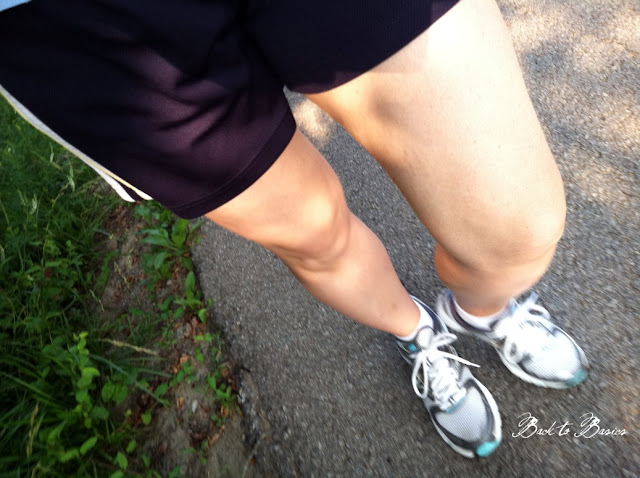 I started watching what I eat in January, but didn't add in exercise until March, and don't laugh but I bought a Wii Fit Plus. The weather was horrible, and we already had the gaming system, so I thought, "It's better than nothing!" Since March 19th, I have faithfully exercised nearly every day. To tell the truth, I've always hated to exercise. Now, don't get me wrong here. I'm a very hard worker, and don't shy away from tasks that most men dread taking on, but exercising just to exercise always seemed bizarre to me.

That was then and this is now.

I've found that it is true that exercising does indeed make me feel better, elevates my mood, and gives me more energy. In May, the rain stopped pouring from the sky and I decided to get myself outside on nice mornings for fresh air. I walked the 5k, and decided that 3 miles was a pretty nice distance to walk.

Just as I was getting into the groove of exercising, Verne had surgery to correct an injury that he sustained from his accident back in November. By doctor's orders he was forbidden to run in case he would fall and re-injure himself. A lifelong runner, this upset him terribly. I was experiencing the endorphins that come from exercise, and he was miserable because he wasn't allowed to participate. He was running 7 miles nearly every day before his accident, and having to sit still felt like torture to him.
Several weeks ago Verne was cleared to run again, and has been at it most every day since then. I'm noticing a huge difference in his outlook, and it's definitely for the better.

Let's back up a minute, and go way back to our dating days. As much as I have always hated exercising, I've always been extremely competitive. If we play a game, answer trivia questions, or go bowling or miniature golfing, I'm pretty much out for blood. All in good fun, of course! ;-) When we were dating we enjoyed miniature golf on a very regular basis, and kept a running tally of our games. In what was to be the very last game of the season we were neck and neck when the clouds broke loose and a thunderstorm stopped us in our tracks. We never got to finish that competition.

Back to the present. Since I've been walking for a month, I've increased my distance some. My three miles crept up to four, and then five. Not everyday, but several times a week. And then, the other day, I issued a challenge to Verne via Facebook. Since he's back to running, and my distance has increased, I thought it would be fun to see who could log more miles in the month of June. A high school friend of mine was tickled, and commented that we should log our miles collectively, and pick a destination as many miles from our home as we log together for a couple's weekend away. We both loved the idea, and are excited about a retreat.

But, we still have the competition to see who can go further. It's such fun to be married to a man who teases. Verne says, "Loser has to make love to the winner!" (Blush!)  For the record, I'm winning 41 miles to 32.4 miles. ;-)

Now, for the scenes mentioned in the title of this post!

As I walked this morning I happened upon some wildlife. Live wildlife, unlike the raccoon that has been on the side of the road for about a week now. Yuck! 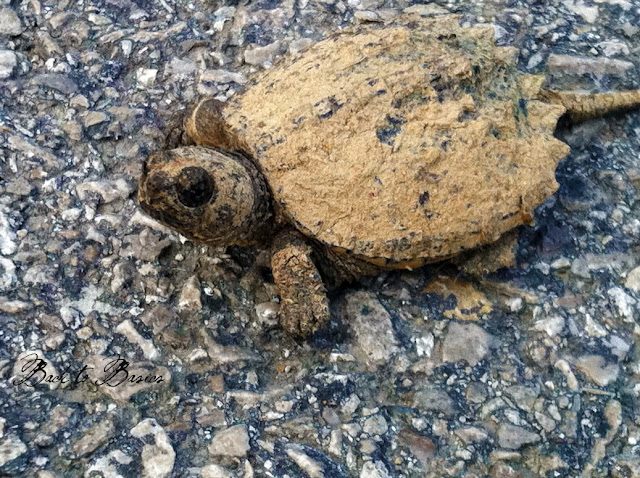 This little guy looked like he'd had a rough night and was square in the middle of the road. I worried he might get run over, and helped him to the side. He was no more than three inches across. Cute!
The next little guy was also in the road about 1.5 miles from the turtle, but there was no way I was helping him cross! If you don't like snakes you may want to look away! 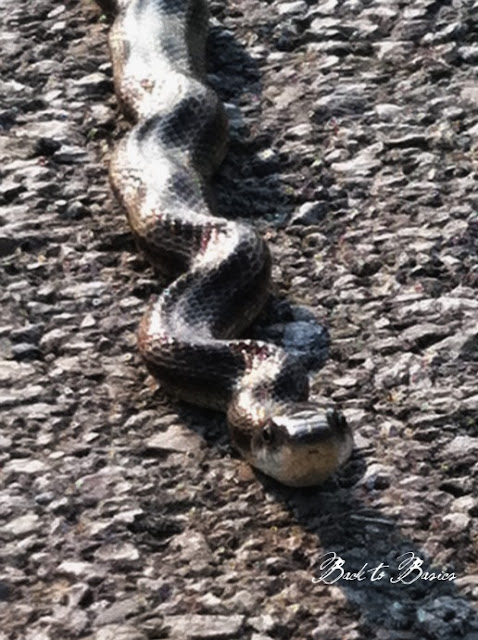 If I keep seeing more of his kind I may have to take up running after all.
Posted by Tracy at 6:53 PM

Wow! 41 miles in only the first 9 days of June. That is impressive. I've just hopped back on the exercise wagon and I'm tracking my miles at dailymile(dot)com. It's free and has a nice format. Good luck with your challenge, though it seems everyone wins in the end. :)

You are doing such a great job! You are inspiring me!

Way to go! as to the snake, I would be screaming and running very fast at that point! YUCK! The snapping turtle is cute though. =)

Keep up the good work! I'm starting interval training at the gym...mostly on the treadmill/elliptical...it kills my knees...but I need to do something. Sigh...why does my body have to get old! =(

Have you ever thought that you winning just might be his plan? :) blessings, marlene