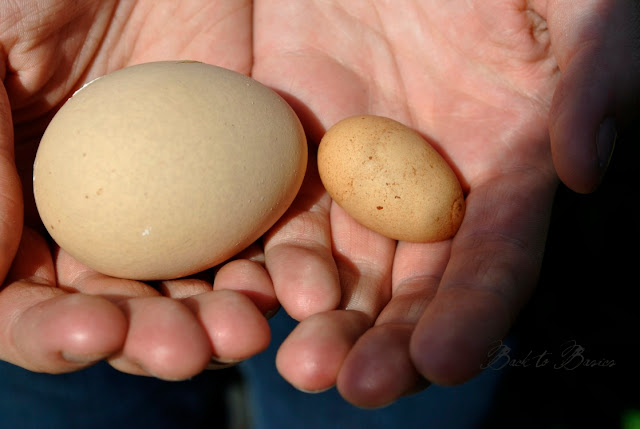 Sounds like the start of a Dr. Suess book, doesn't it?

The chickens are such amusing little creatures, and I never would have thought that we'd enjoy them as much as we do. Call us crazy, but we keep a log of sorts on the kitchen counter next to a postage scale that is extremely accurate. We weigh each egg as it is brought into the house, and record the weight as well as which variety of chicken laid it. This way we know whom is laying, and whom isn't. Also, I record each time I buy a new bag of food, and then divide the cost of the food by the number of eggs collected from that bag. This tells me exactly what a dozen of eggs is costing me.

Anywhoo, even when our chickens first started laying, their smallest eggs were at least 1.4 ounces, and they've been as large as 3.6 ounces. On average, they weigh about 2.2 ounces each. When Abigail brought this little egg in the other day, my first thought was, "The babies are too young to be laying yet." I inquired as to where she had found it, and she said that it had been in a nesting box. The weight of the egg? .25 ounces. It was tiny! We were dying to crack it open to see the little yolk, but alas, it had none.

Here's an interesting site in case you're interested in other odd eggs.
Posted by Tracy at 10:26 PM

Logging the eggs? O.k. that is something I never thought to do....it does provide for some interesting stats though.

cool! and a pretty photo.
so how much does a dozen of homegrown eggs usually cost? My cousin got rid of chickens because he said it was too expensive, but I don't think money is always the right bottom line. I mean, look at how much fun and satisfaction you have with yours. If our zoning laws change, we are definitely getting some chickens!

and btw, I did find the facebook link by googling and it had come up on my husband's page too - - and I got tons of new hits. thanks again for pointing it out :)

Interesting...that is a little egg!


I think it is great to have chickens...

I don't have chickens but eggs are a daily essential in my diet! Lots of protein found in those little gems. On that website (Odd Eggs), that egg within an egg is amazing. I think I'd log my eggs too if I have chickens :o)