...and then came spring. One early morning as we were running through town and had just come over the crest of a hill, she said, "I feel like I'm running six weeks pregnant." Again, words failed me. My mind raced. Is she pregnant? Is this her way of telling me? What if she isn't, and I ask: will her heart hurt even more? I remained silent, and we finished our run and parted ways.

Several days later as we ran in the hour before dawn and we were talking about upcoming races, she counted herself out for a fall marathon. That's when I knew. And I had the courage to ask, "Are you...?" Yes, joy comes in the morning! My heart was happy, and light, and thankful.

The months passed and Amy kept on running until finally we had to train separately as we approached our marathon date, and she approached her due date. But still, nearly every day she'd check in with me, asking me for updates, and coaching me along the way. At the local fabric store I spied a piece of number fabric and was instantly drawn to it for a baby quilt for Amy's little one. Runners are constantly crunching numbers, trying to set PRs, and so forth. The rest of the fabrics were chosen to coordinate with the colors of the numbers, and to suit a baby boy. The pattern is from Allison Harris of Cluck Cluck Sew, and is called Kaleidoscope.

I started cutting pieces in early September, and had the hand-quilting done by early December. I just had to wait for the new little babe to make his appearance so I could label the back with his name. Waiting is hard, even when you aren't the expectant mother. ;-) 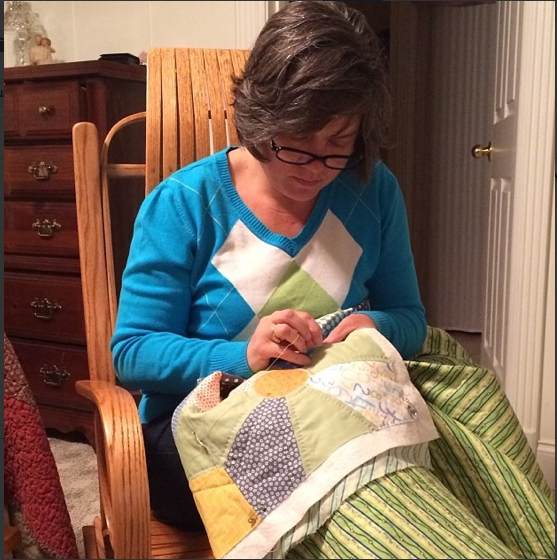 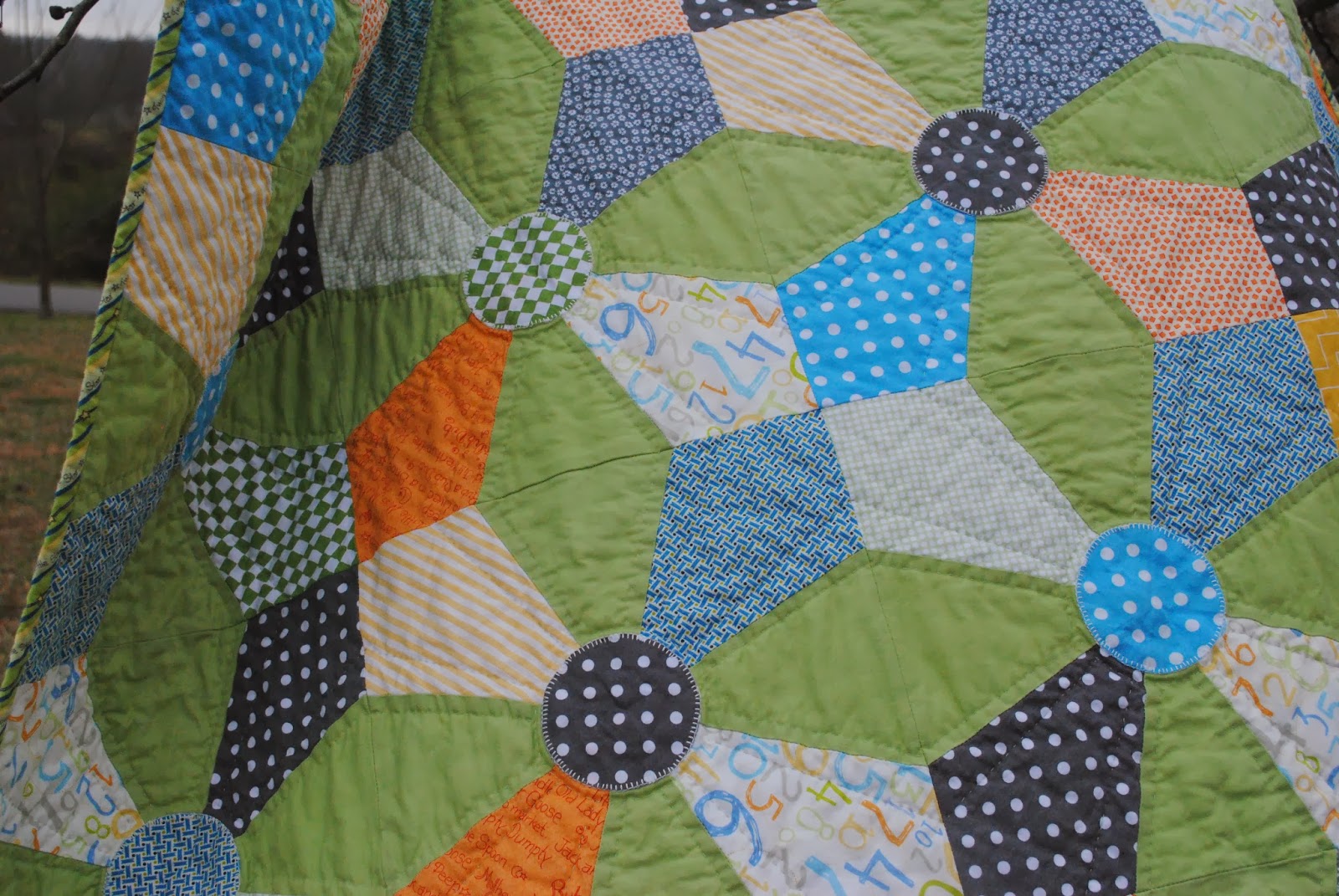 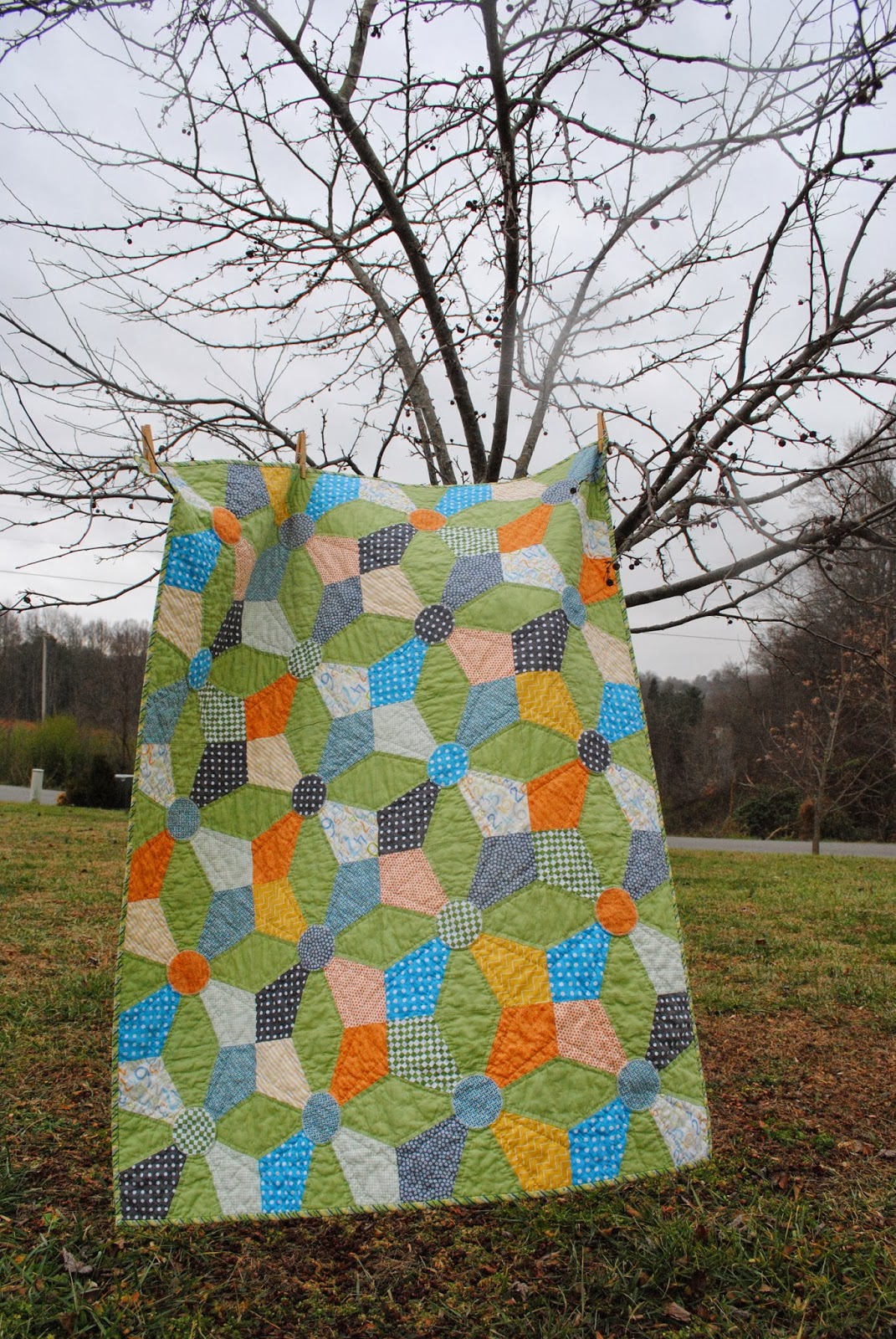 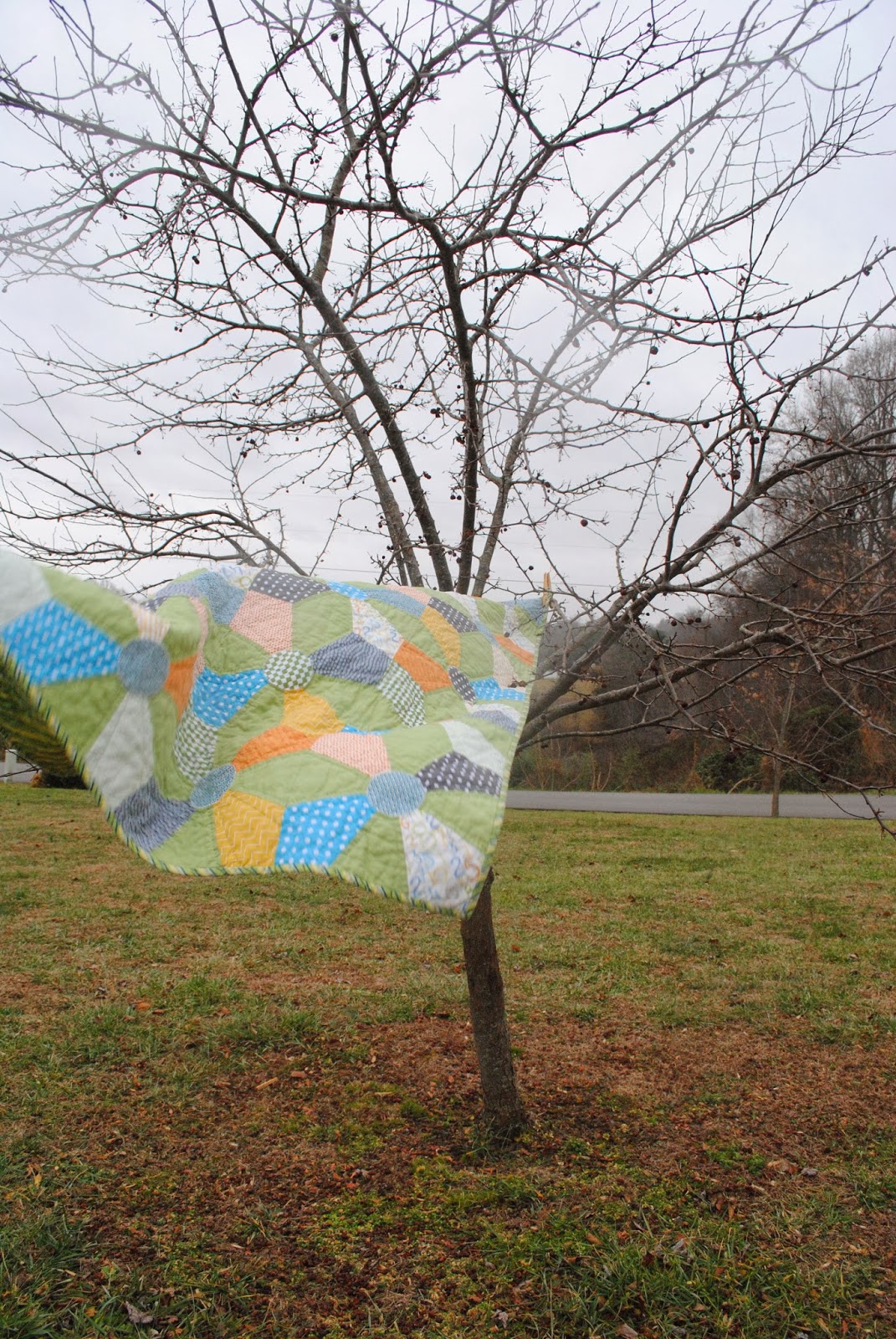 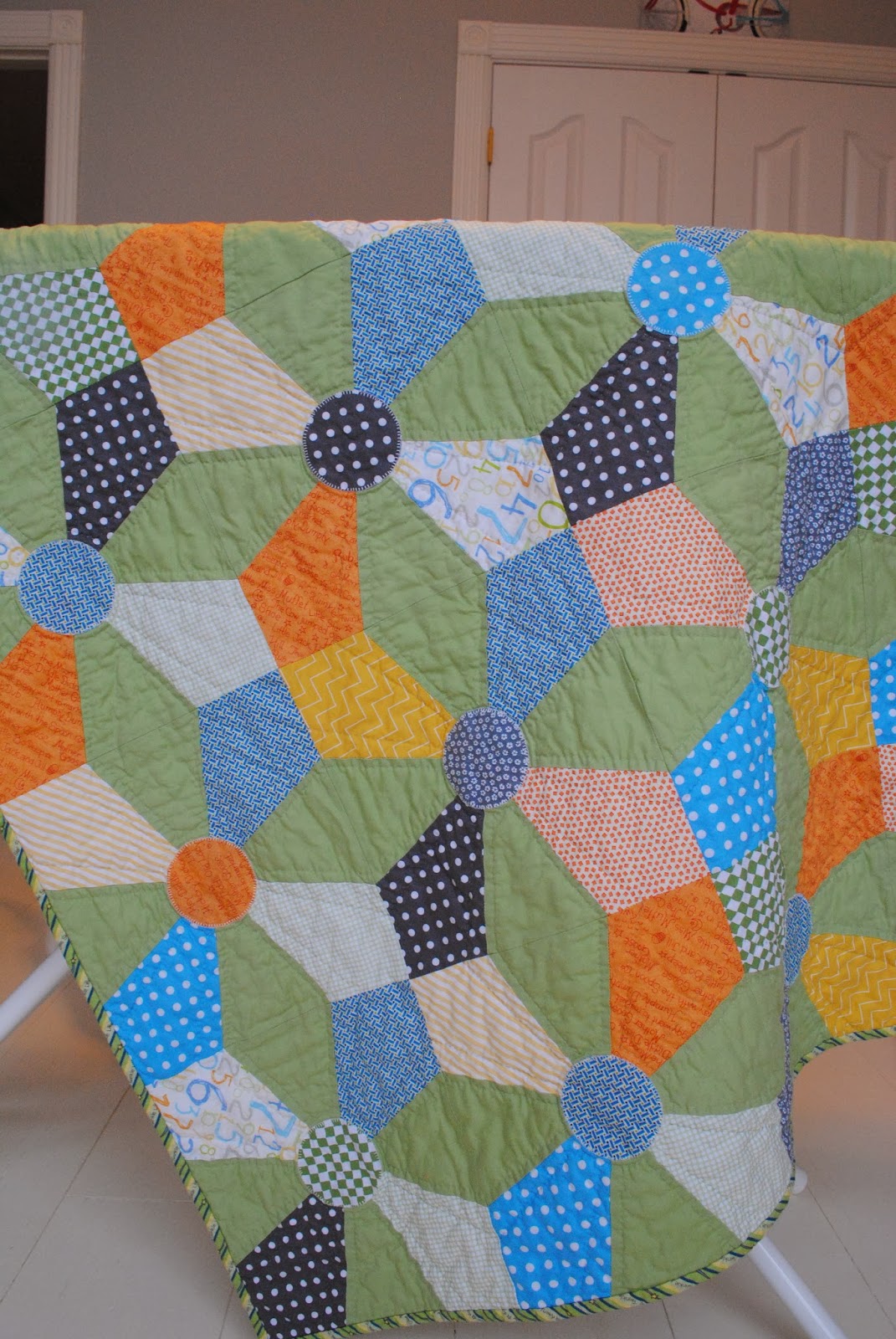 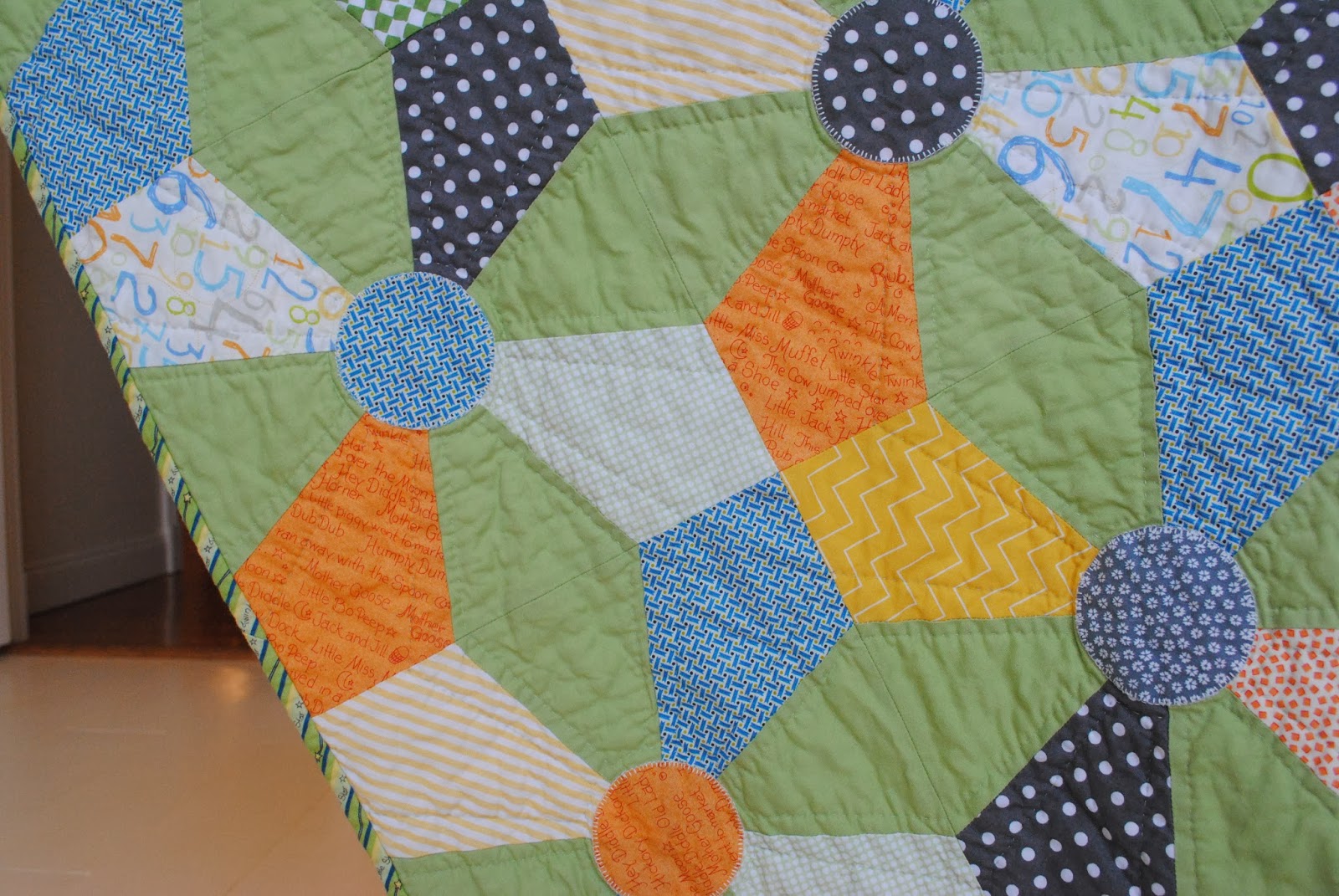 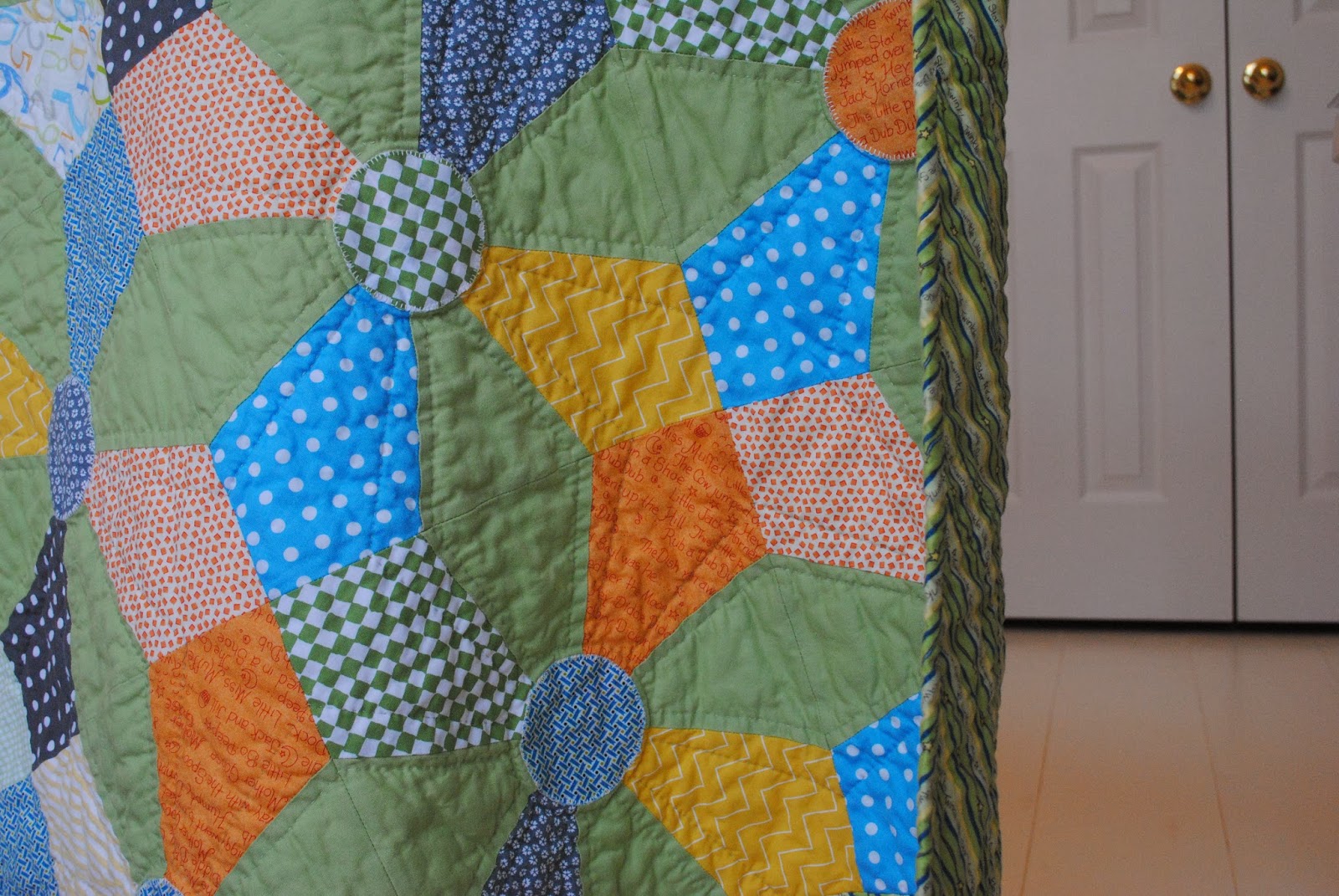 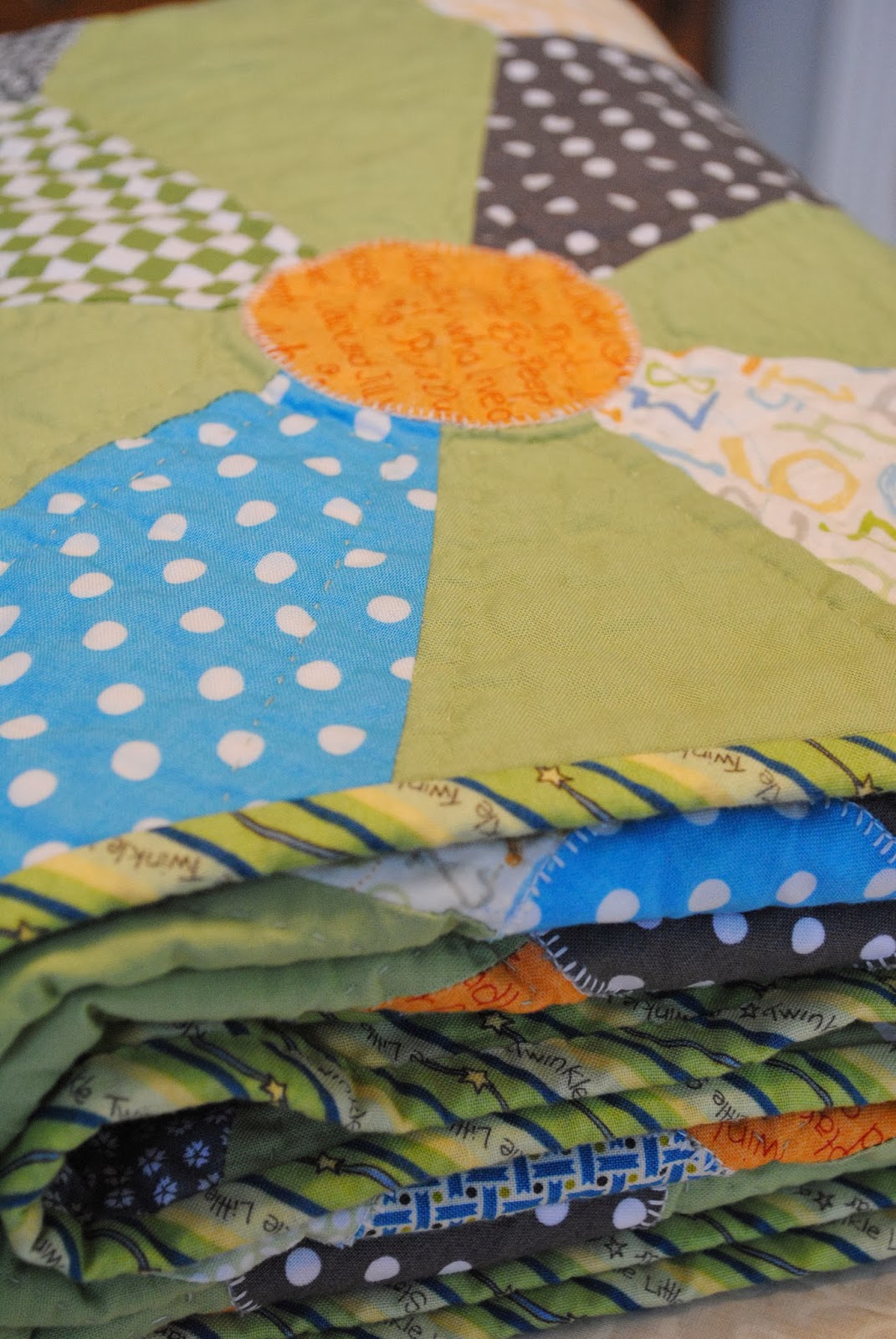 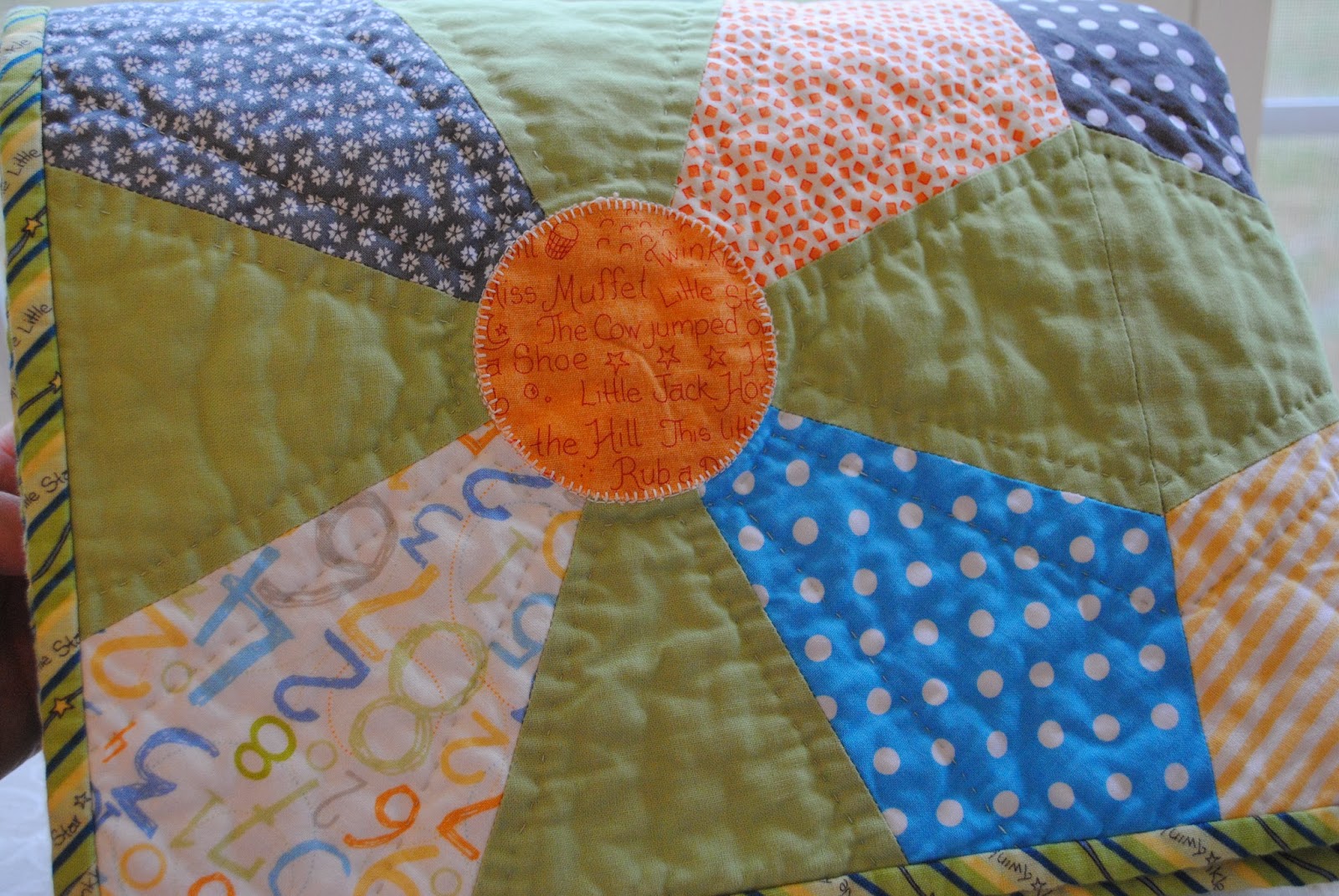 Finally, on December 16, Grant came into the world healthy and loved. I shared with Amy how much I loved his name, and how I thought it was so fitting since God had granted her another baby after losing Jack. (I was reminded a bit of Hannah in 1 Samuel 1.) Two full weeks passed until we got to meet this new little beautiful person, and it was good to finally hold him. 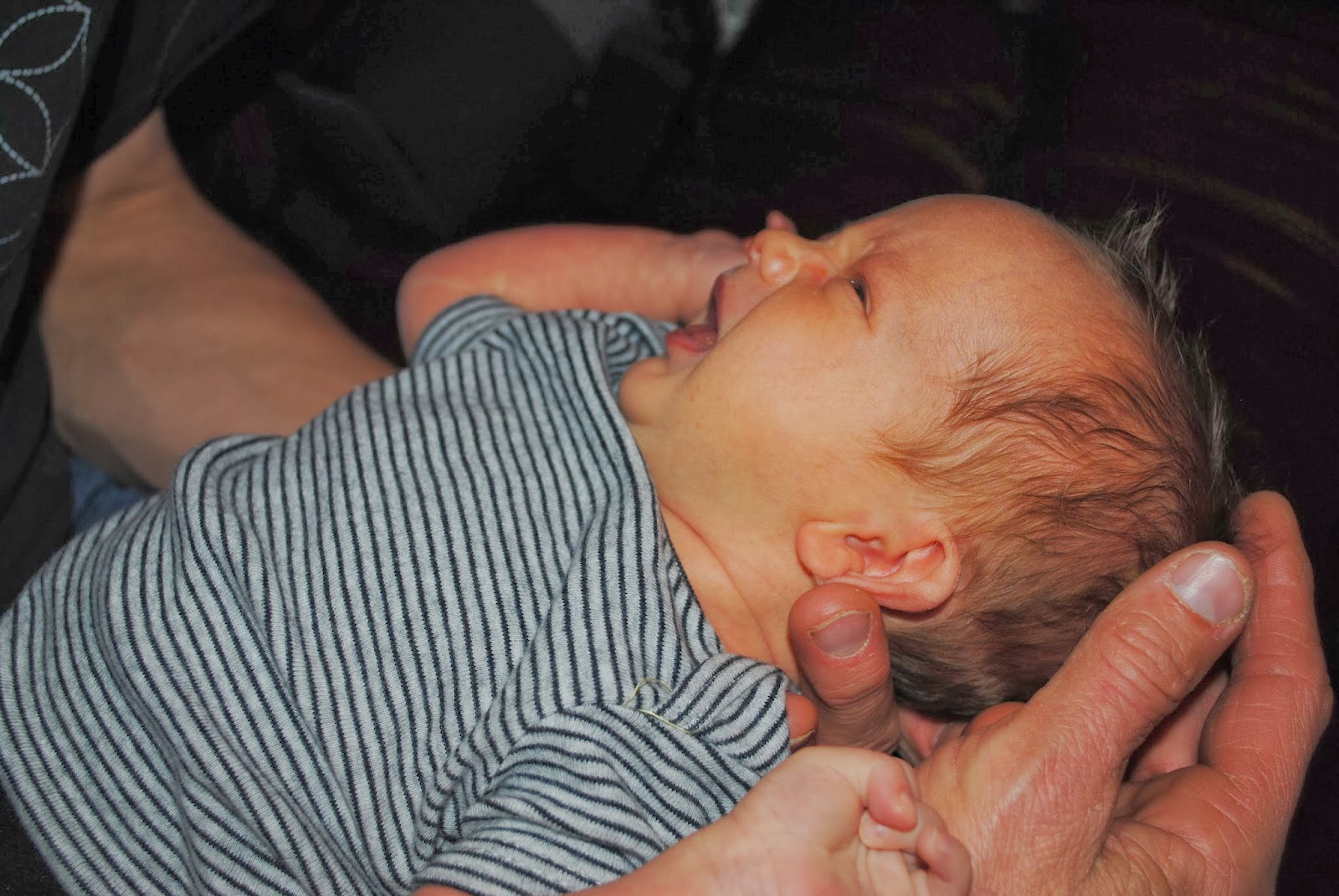 It was good to see Verne holding him, too. It took me back to the days when our children were newborns. He definitely still has the touch, and was able to put Grant to sleep. 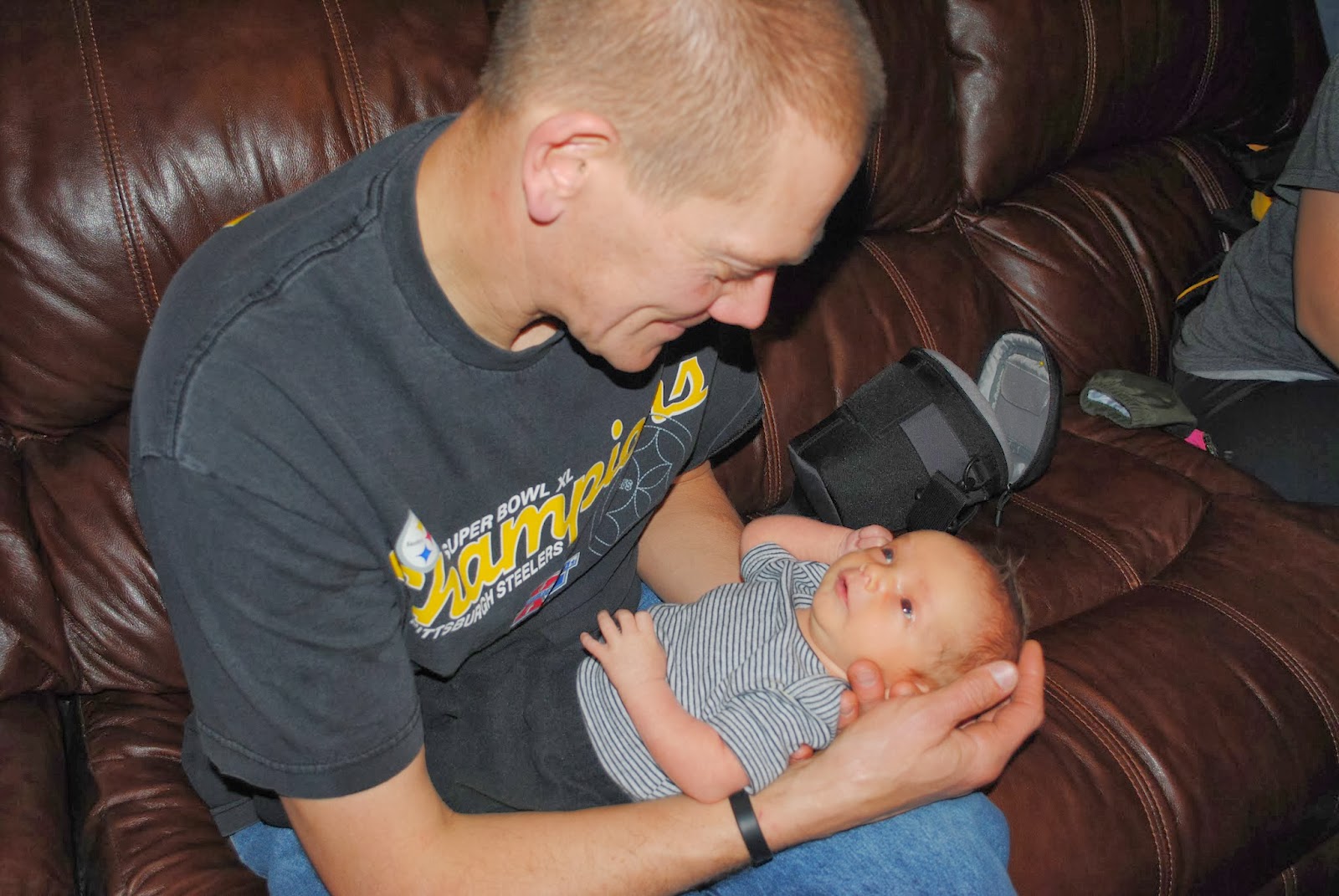 Behold, children are a heritage from the Lord,
The fruit of the womb is a reward.
Like arrows in the hand of a warrior,
So are the children of one’s youth.
Happy is the man who has his quiver full of them;
They shall not be ashamed,
But shall speak with their enemies in the gate.
Psalm 127:3-5

You always do things perfectly. Love the way you incorporated the numbers into this lovely quilt. What a treasure to this mother and this child.

As always... perfect! But you know for me, it is not just your skill in quilting or your good eye for selecting patterns and color, but the thought you put into it... taking the time to really know the person - their personality, their interests, their heart... this is what makes your quilts soooooooo special!!!

So, so beautiful, Tracy.

What a gift you have given to your friend, and her precious baby!

The quilt is amazing - you are so talented. I love the colors and that pattern.

Love you and your heart.

Tracy, thanks for sharing the story. I love the numbers and I love his name.....and of course the quilt and you.
Paula

I was wondering if you would do a blog post on how to begin quilting. You see its something that's always interested me, but when I go to my local fabric store, I'm completely overwhelmed and simply walk out. I would like to do quilting by hand since I don't have a machine of any sort and any help/advice you could give I would greatly appreciate.

Have a great day,
Rebecca

oh Tracy. This made me teary. That you made 2 quilts for your friend's little boys. . . You are God's hands.

The quilt is beautiful!!! The colors are gorgeous!

I have a little 9 year old girl beside me who is giddy because this little boy was born on her birthday! :)

I like the way you went through the journey with your friend. Really sweet!