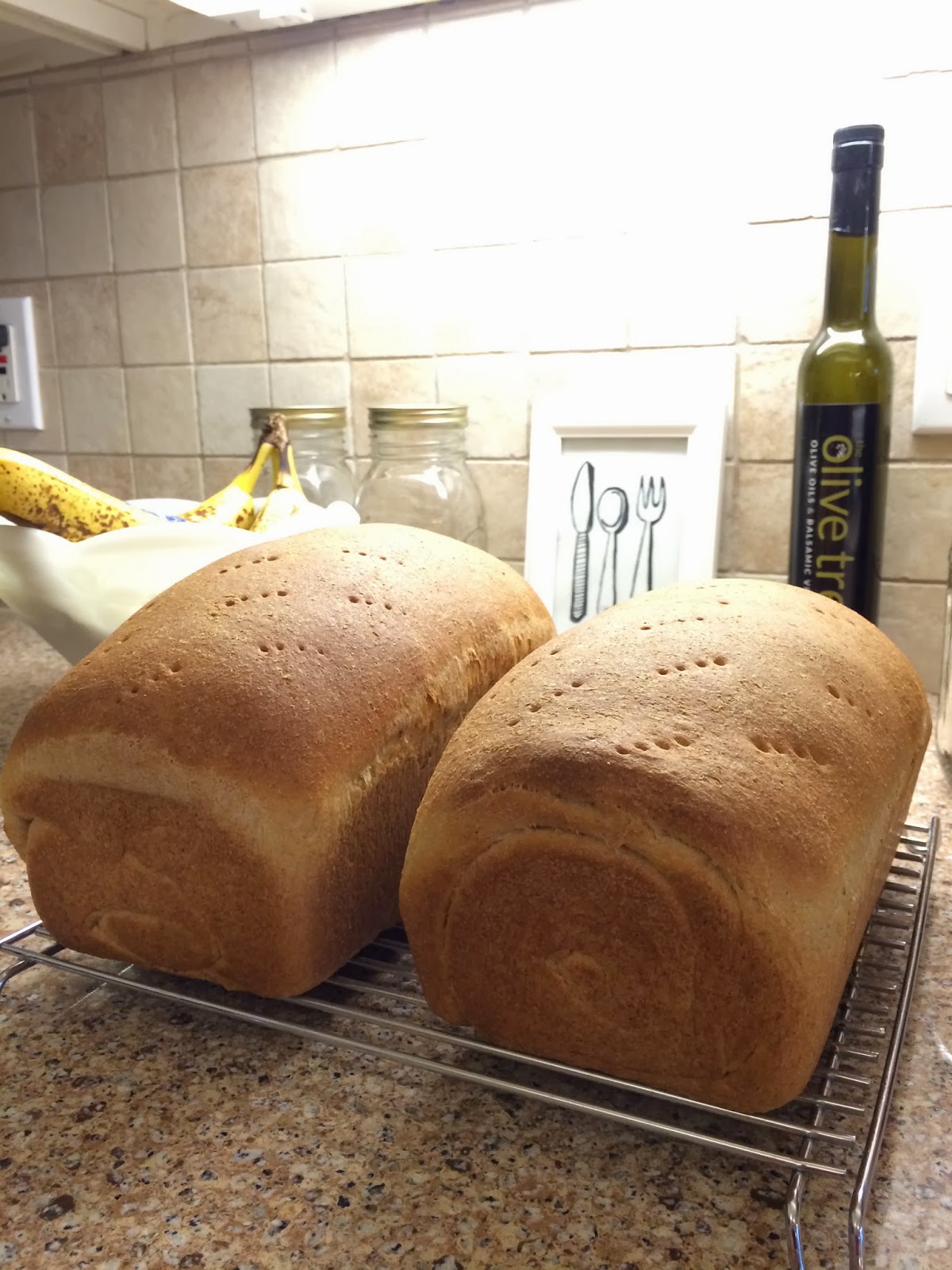 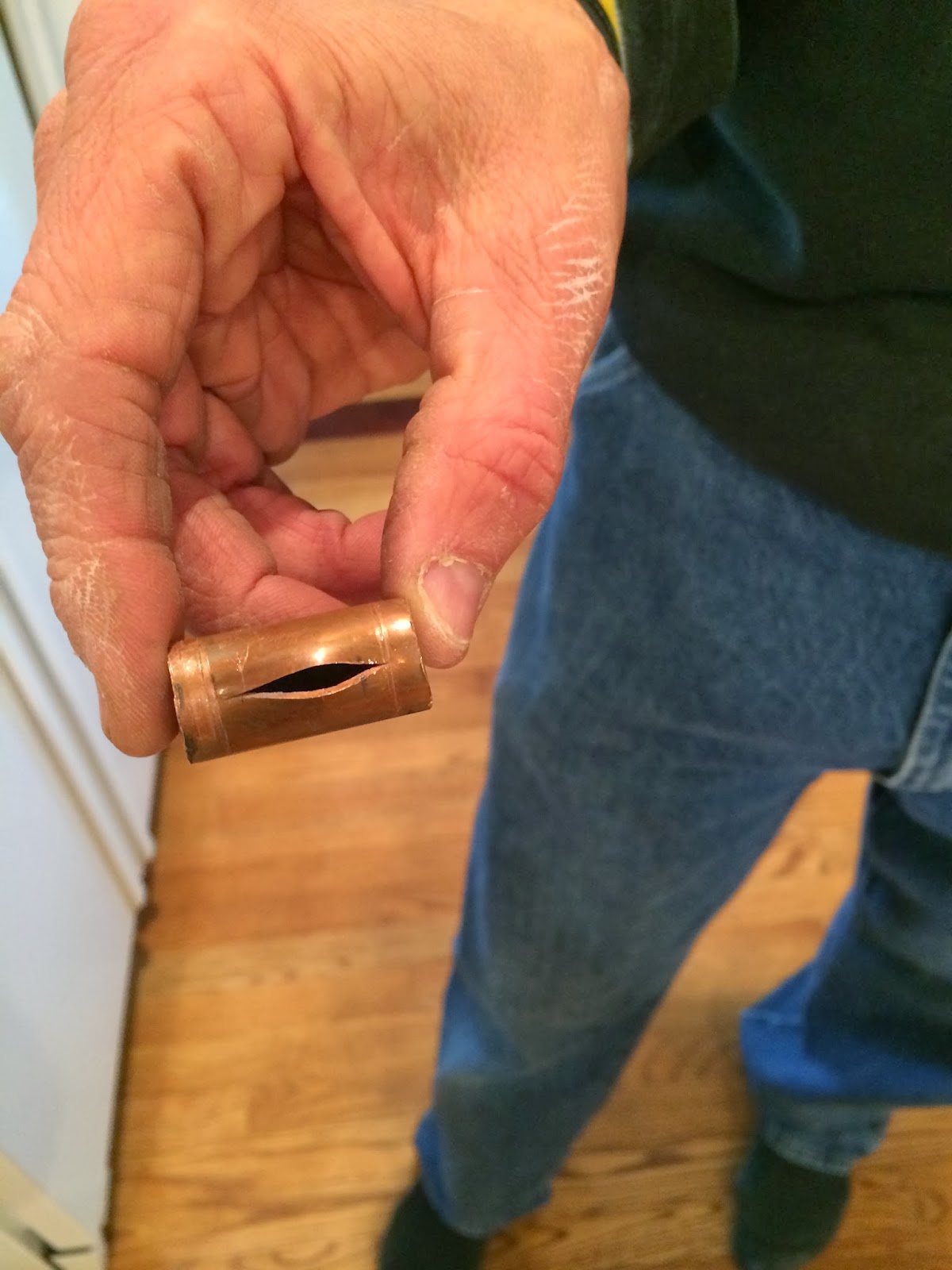 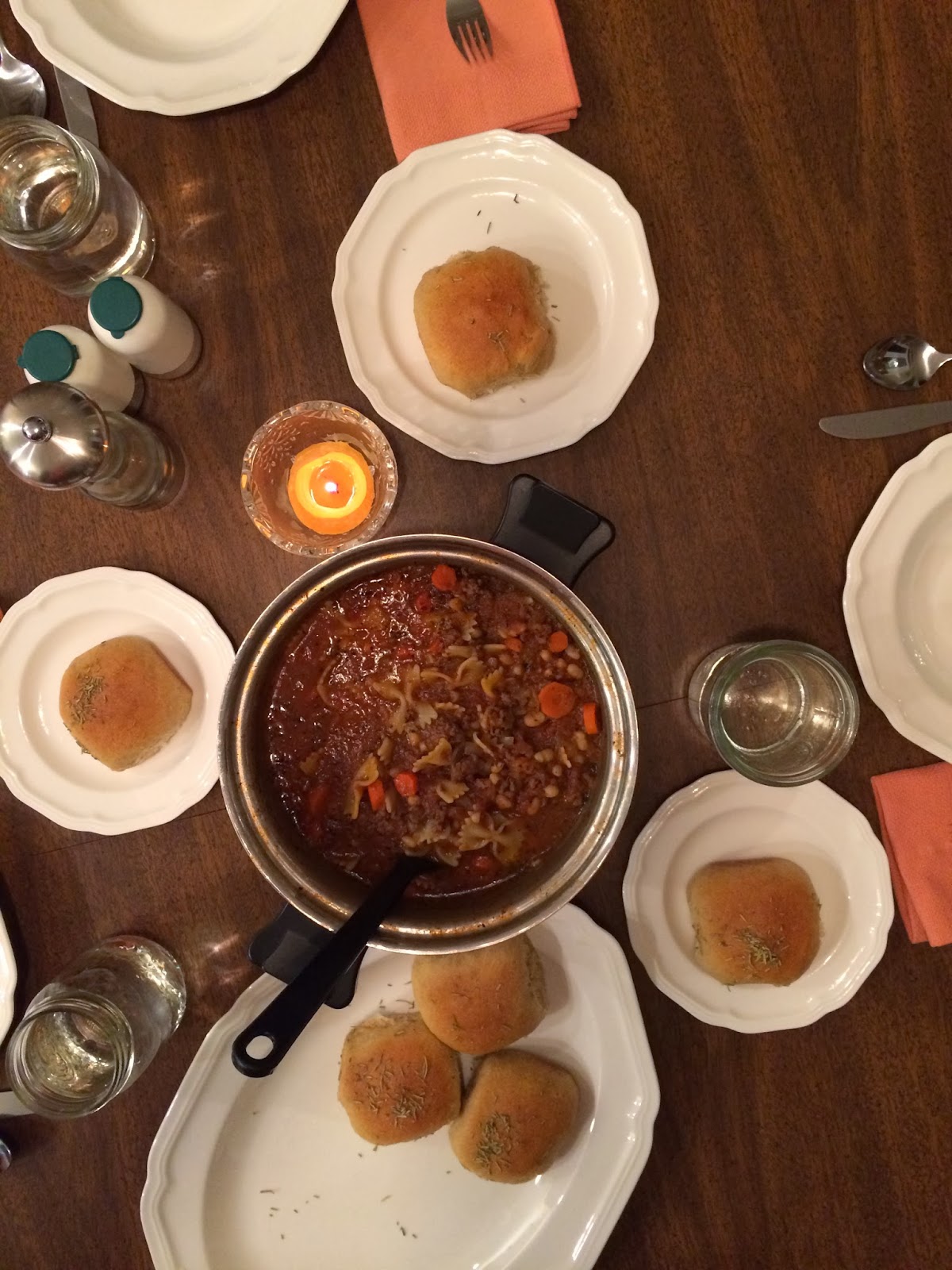 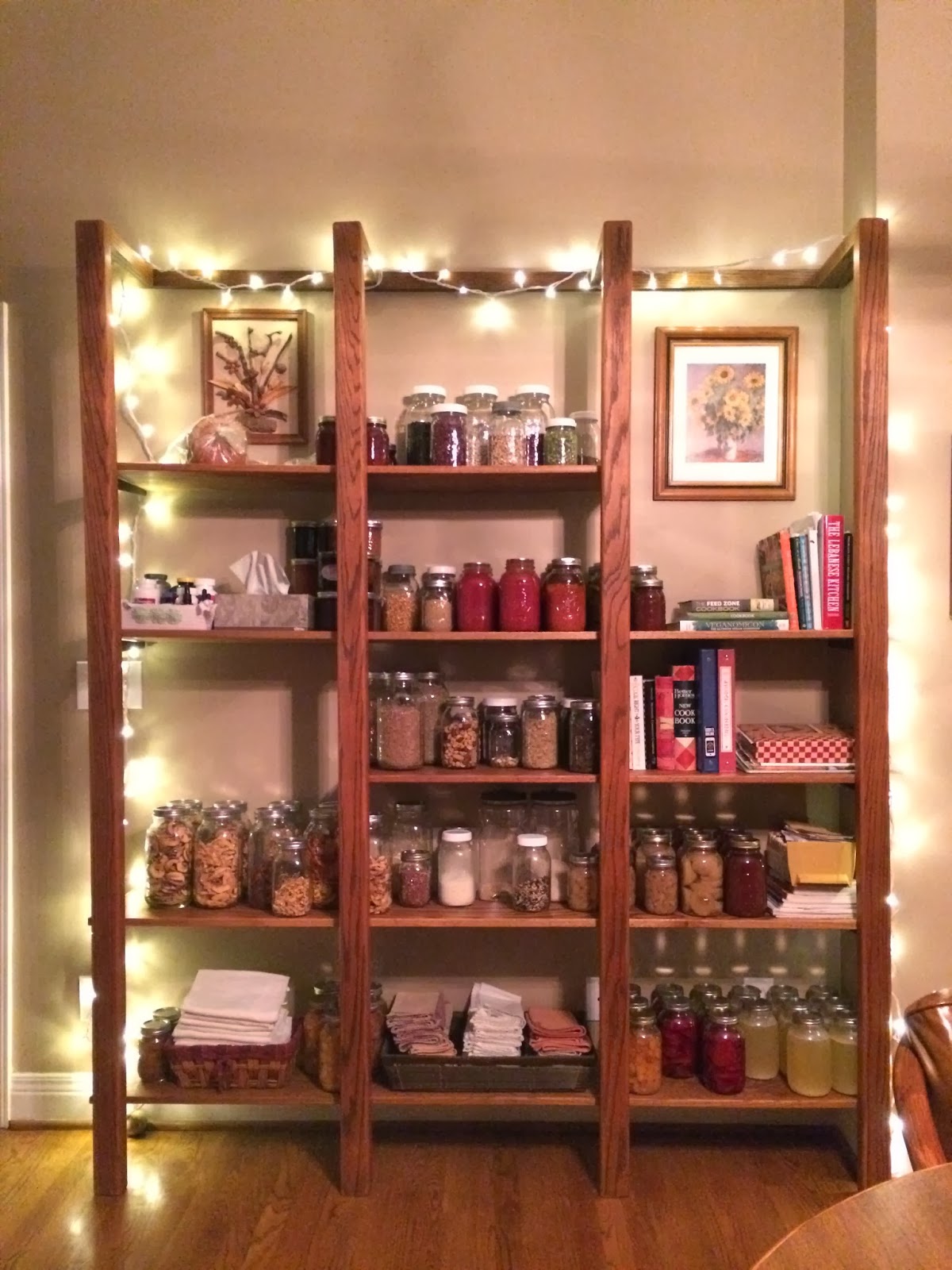 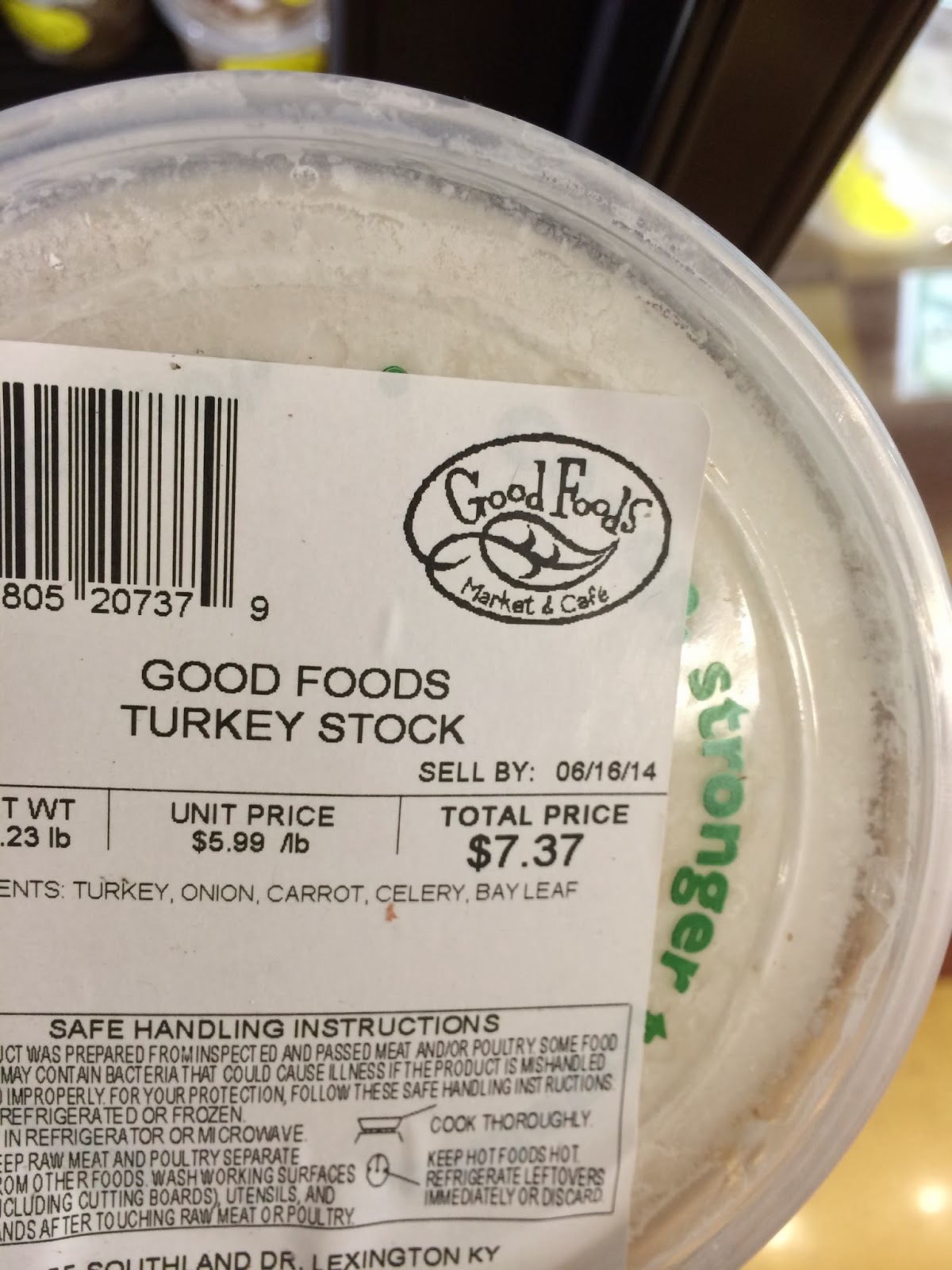 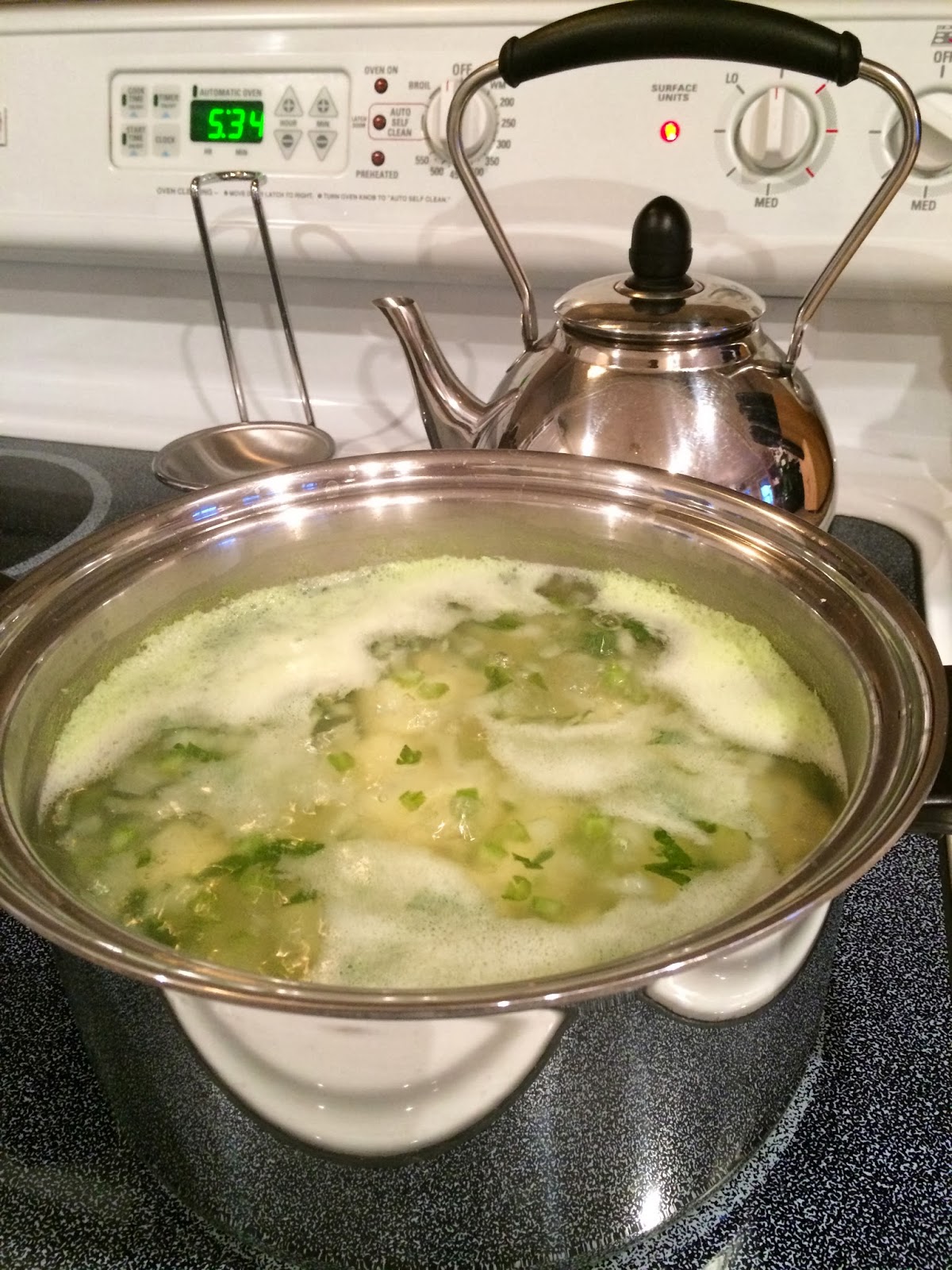 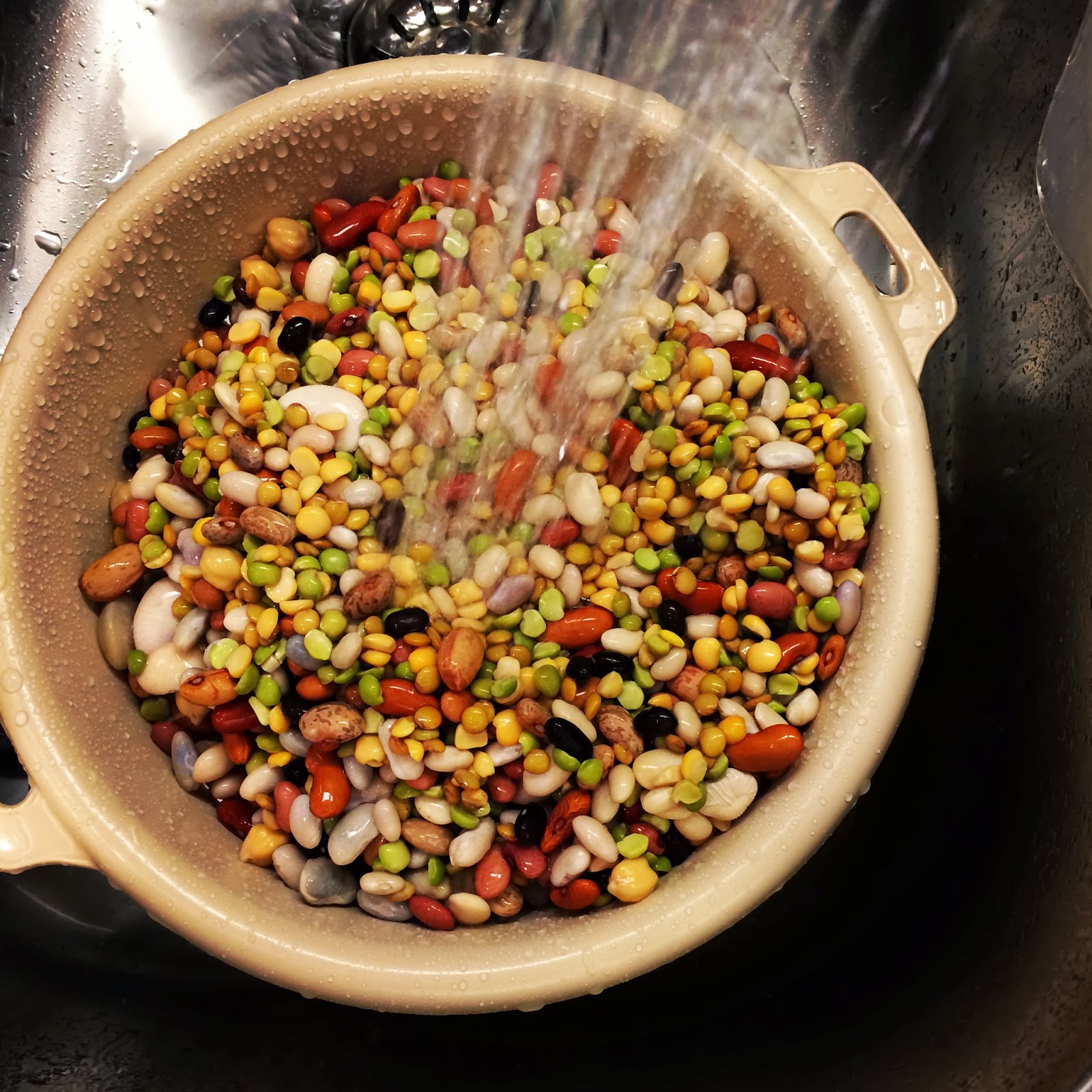 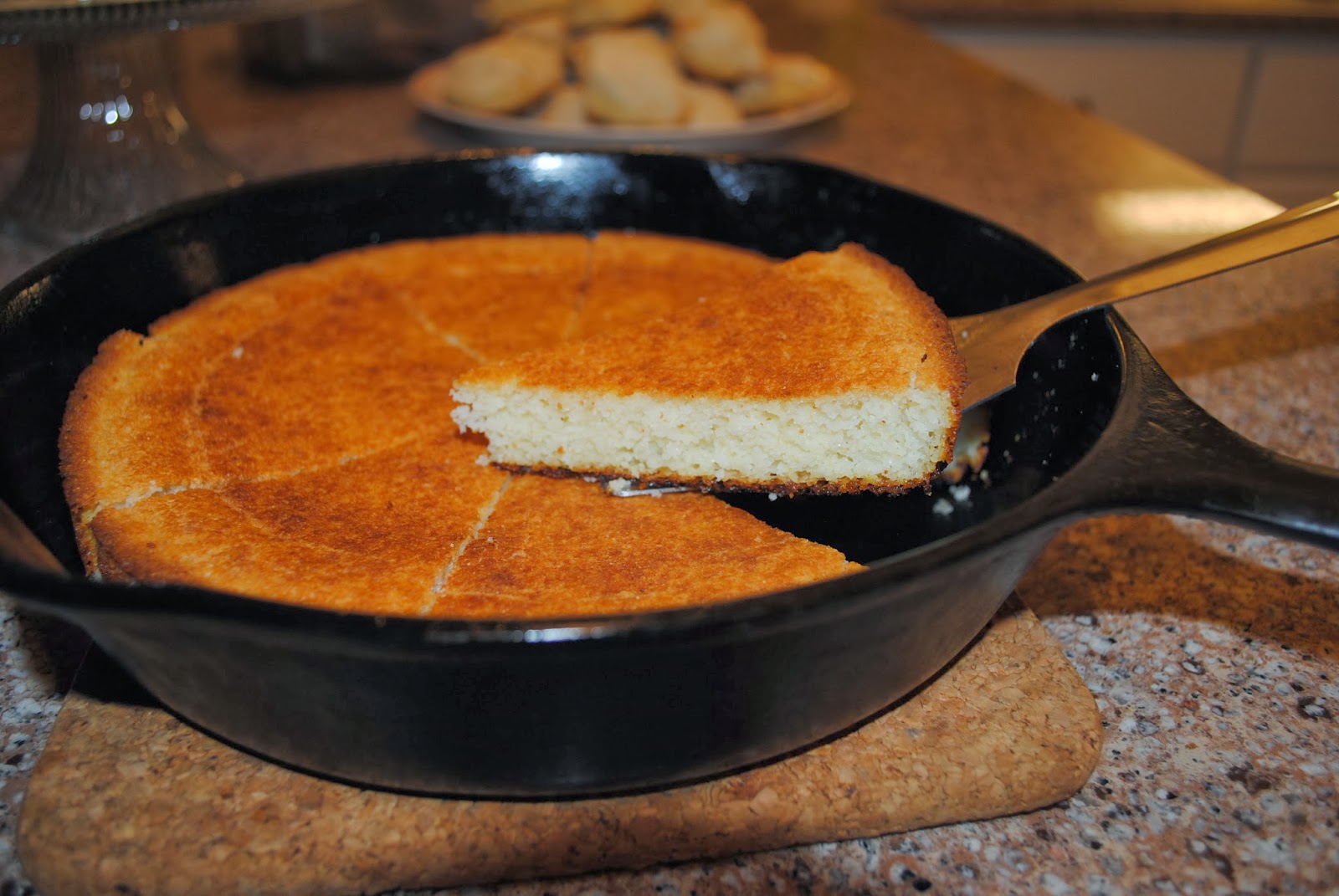 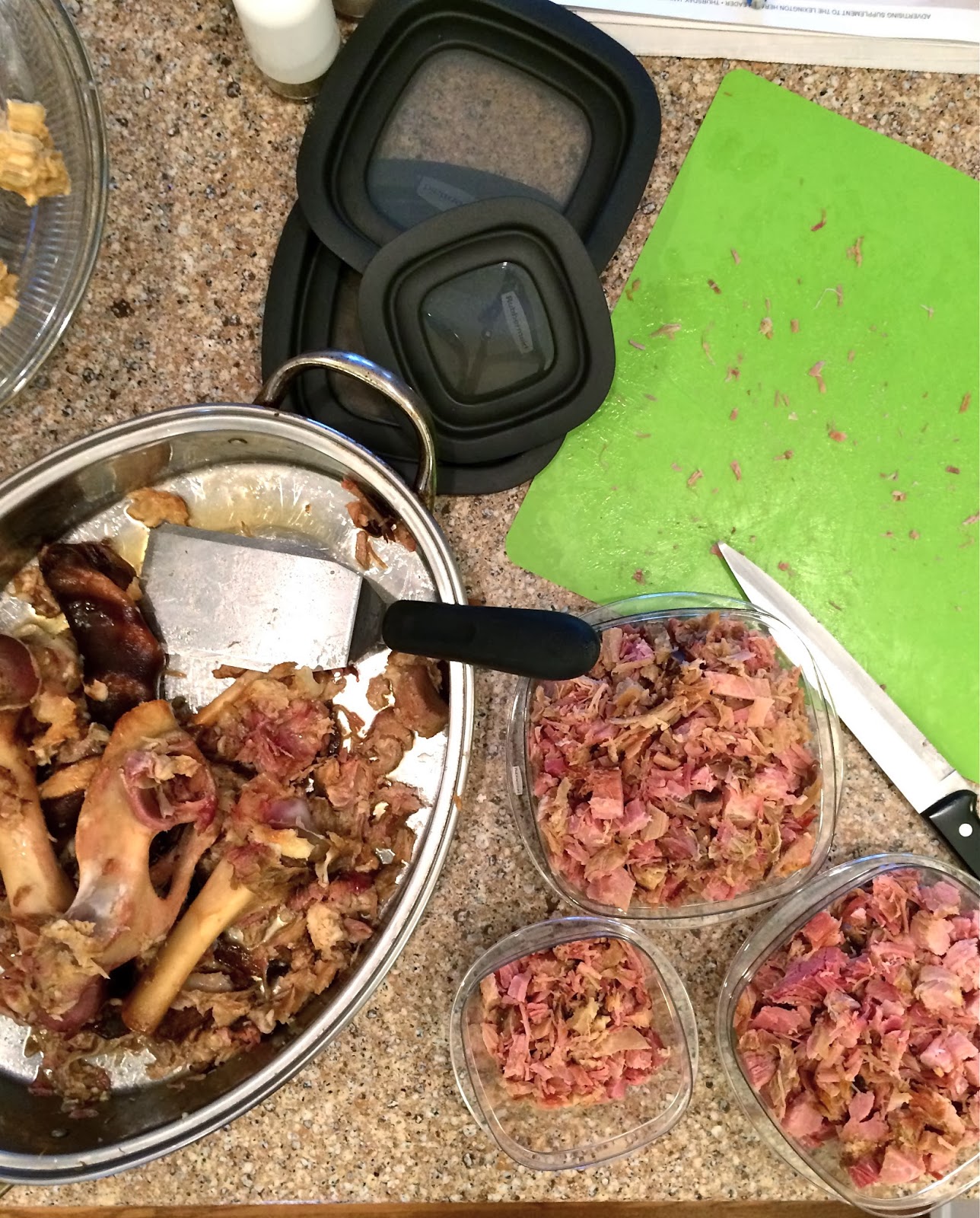 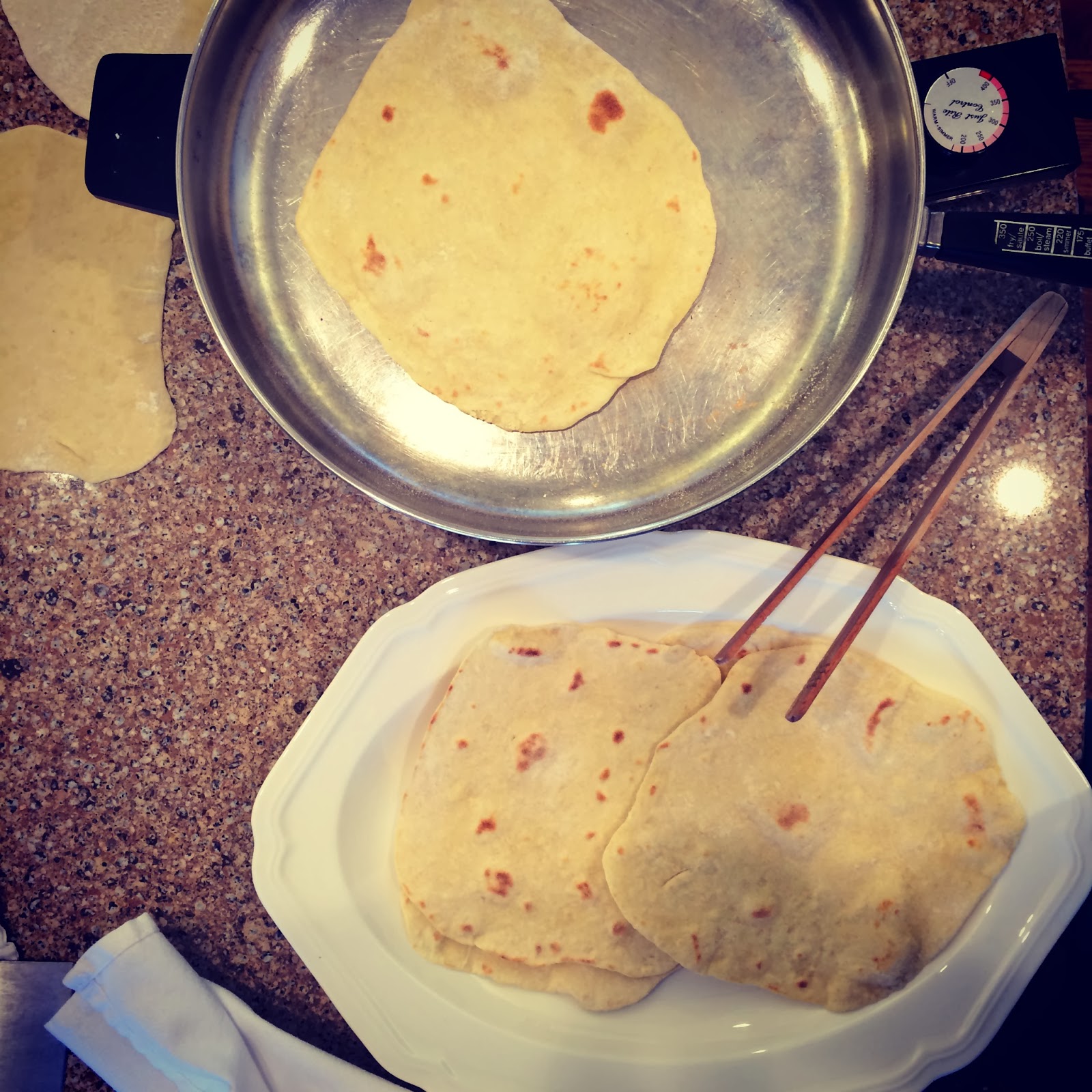 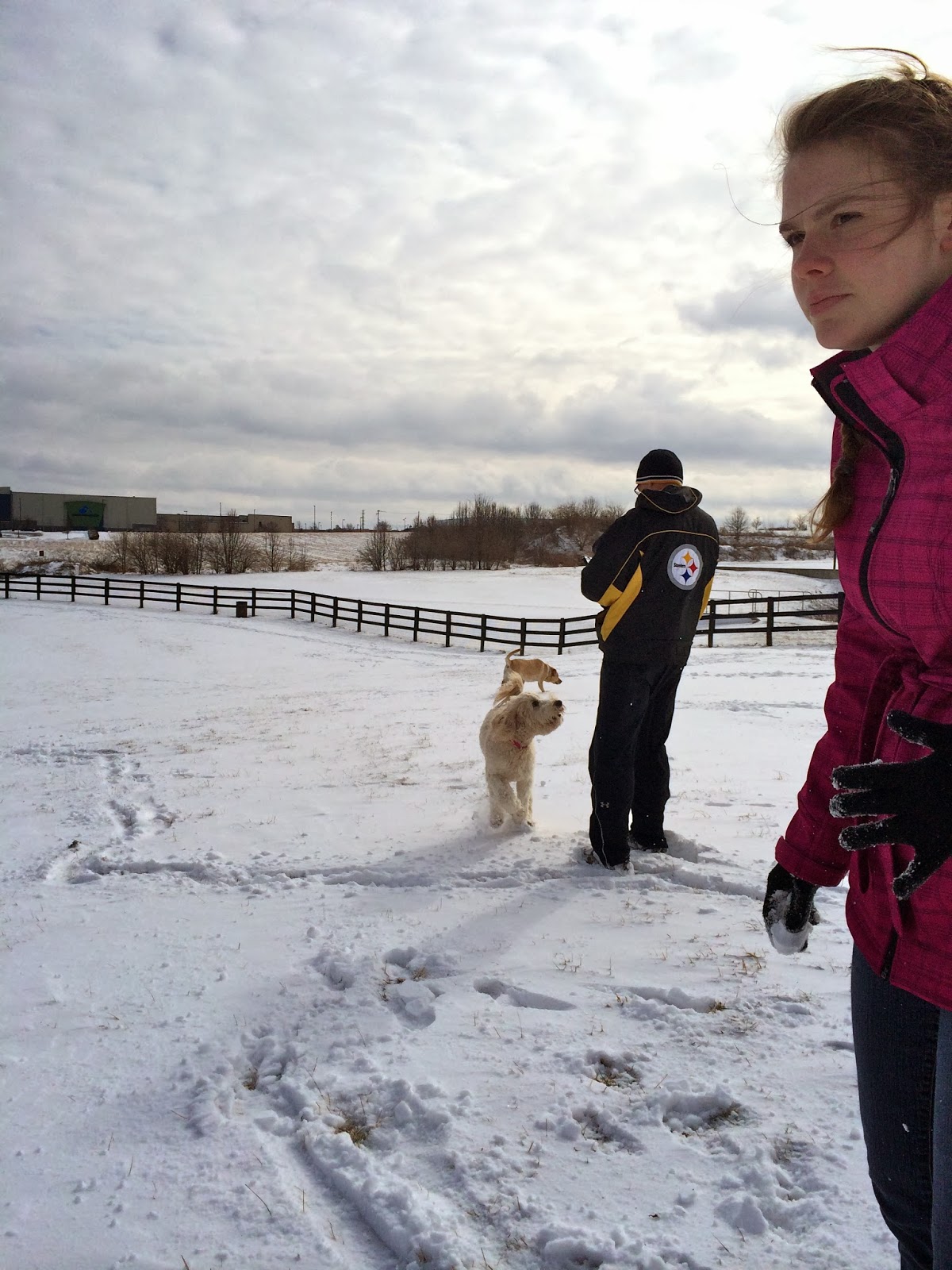 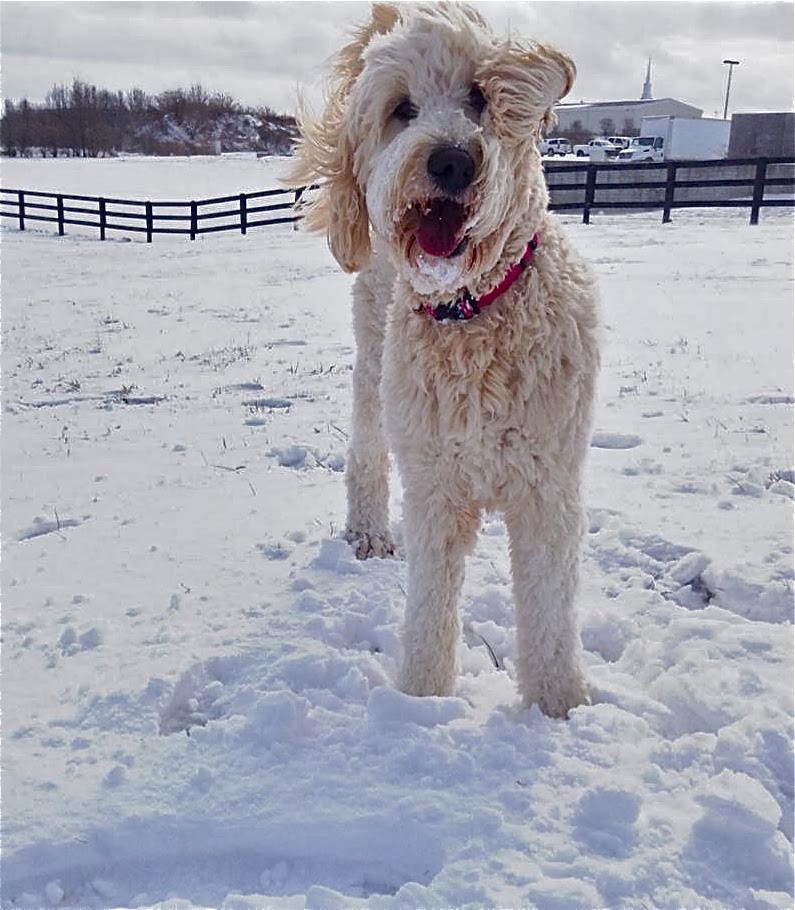 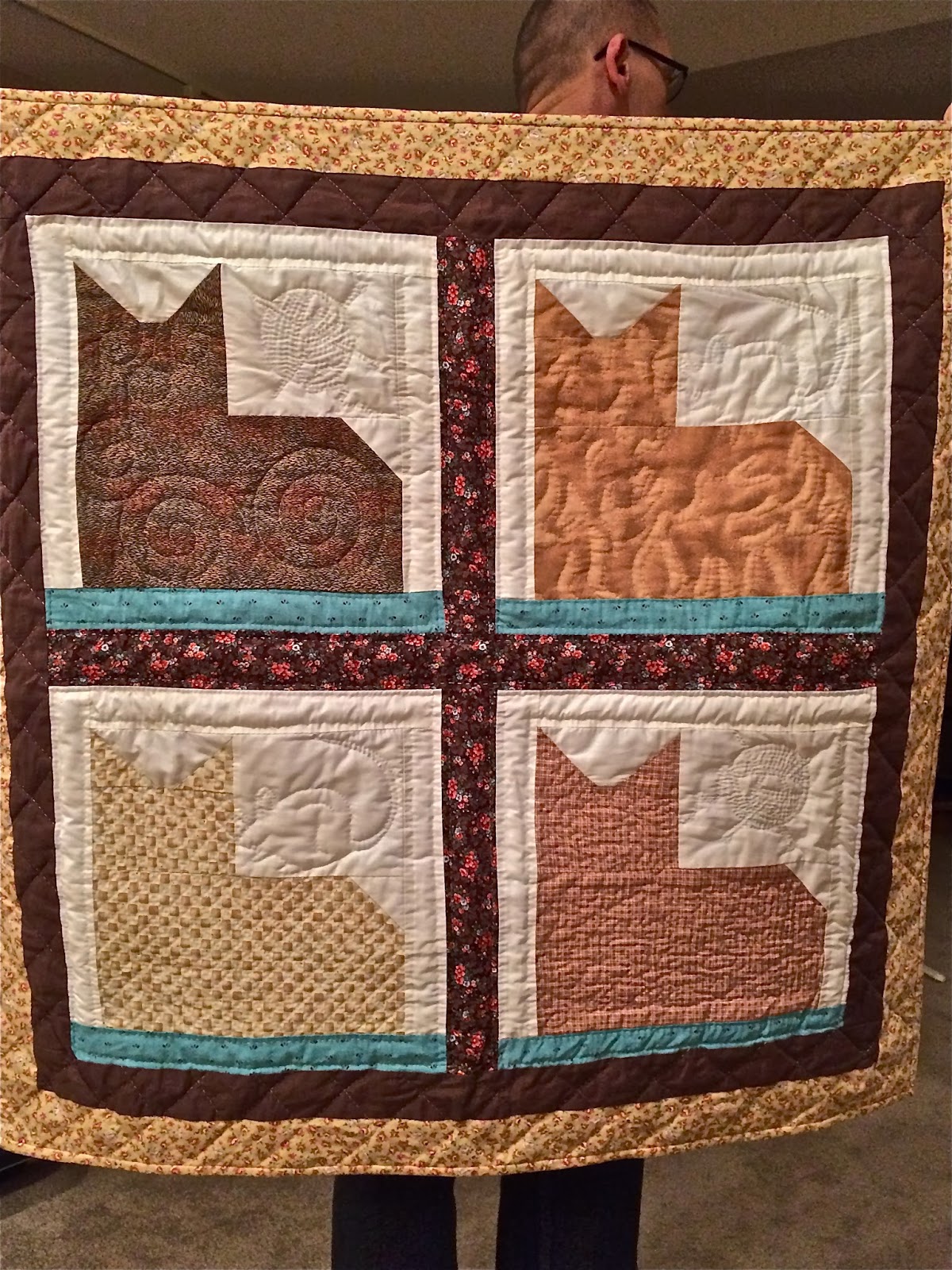 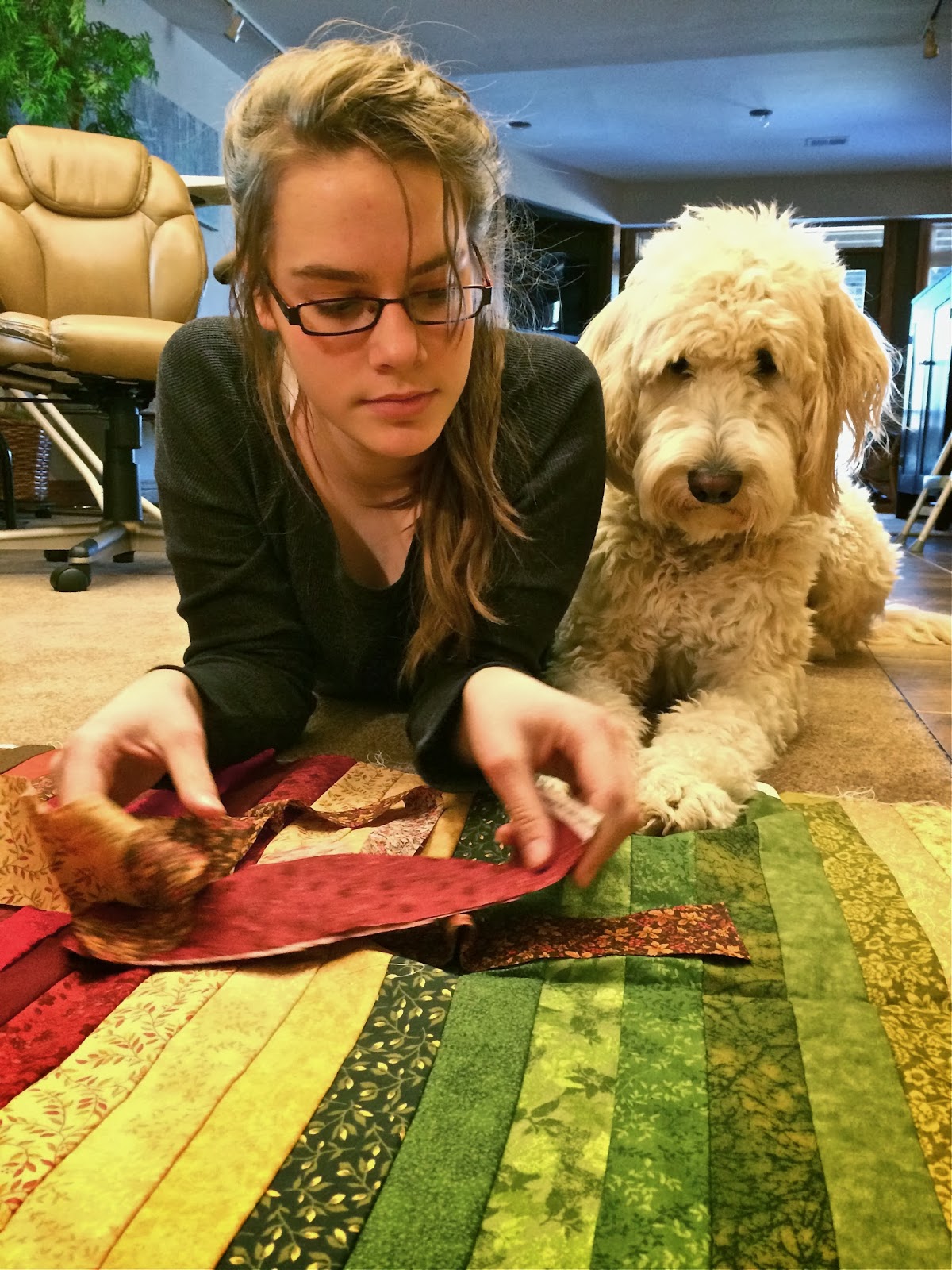 Though most people I know are ready for spring, I happen to love this time of year. Snowy days mean slower days, fresh breads, puzzles being worked on the table, and broken pipes. Okay, I could do without the broken pipes. Yes, pipe(s). Two of them. Winter days also mean big pots of soup. A few we've had this month: Pasta Fagioli, Potato, Ham and Bean, and Italian Sausage Soup. I used dried beans vs. canned each time, saving money. Click on the names of the dishes to find the recipes.

Winter means higher heating costs, and trying to stay warm with hearty meals. For me, it also means getting creative and serving satisfying meals without breaking the bank. Planning ahead, and not reaching for convenience foods is one way to do that. Rich soups served alongside homemade breads are nourishing, satisfying, and pretty inexpensive.

Back at Thanksgiving, I cooked my organic turkey carcass for hours, and then canned the broth. I received 16 quarts of broth so rich it tastes like butter for my efforts. I paid $56 for my turkey, which seemed high at the time, but considering the amount of meat I got off of it, plus the broth, that turkey was cheap! It's easy to spend close to $3 a quart for watery broth at the grocery store. Even the non-organic brands aren't cheap. My broth is so rich, I can add water at a 1:1 ratio, and it still looks like I added food coloring(which I never would!) and tastes amazing. After seeing that good broth was being sold at a local grocery store for $7 a PINT, I was feeling extra good about my efforts.

I had a ham bone in the freezer that I used to make a huge pot of ham and bean soup. I boiled it alone for several hours, and then removed every bit of meat from the bone. I added about 6 cups of meat back to the soup pot, and froze 10 more cups. I seriously have no idea how I got that much meat off a leftover hambone. We hosted four post-college guys from our church for dinner, and I served that big pot of soup with homemade cornbread and homemade cookies. We had made several batches of cookies and set some aside for a gathering with friends the next afternoon. I allotted several dozen cookies for our gathering with the young men, and what they didn't finish here I sent home with them.

Three moms, and seven children gathered for lunch and games here the next afternoon. I cooked a big chicken ($12) the day before and took every piece of meat from the bones. I saved 6 cups out for lunch, and froze two more cups. I cooked the carcass all night, and got 5 quarts of rich broth. I froze the broth rather than canning it and unfortunately, two jars broke in the freezer. I nearly cried. I'm convinced canning is the way to go. It saves freezer space, and allows you to use the broth at a moment's notice rather than having to wait for it to thaw.

I made homemade tortillas, and lots of them. 32, to be exact. What would have cost me $10-12 dollars to buy was produced for about $2. The menu was build-your-own chicken quesadillas with cheese, sour cream, peppers, black olives, and homemade salsa, home-canned fruit cocktail, and cookies that had been made in advance. This wasn't the cheapest lunch to provide, mostly because of the toppings for the quesadillas, but it was a splurge since I'd spent next to nothing for our meals the rest of the week.

In the photo with the tortillas, you'll see my Farberware electric skillet. I love this skillet. Nearly 25 years ago, my brother Brian bought me a stainless steel electric skillet for a wedding gift. I used it nearly every day, sometime several times a day, and it eventually wore out. My mom was no longer using hers much, and gave it to me. Though it's the same age as my original skillet, and identical, it's still going strong. Except it wasn't heating quite like it should. Verne started looking to replace it for me as a Christmas gift, but stainless steel electric skillets are very hard to come by these days, as most are teflon coated now. No, thank you! If you can find one, they're upwards of $200. Knowing how much I use this skillet he was willing to buy one, but I was convinced to make the current one work. I scoured E-Bay and while I could find a replacement cord, the reviews said that they didn't fit quite right. I mentioned it to my friend Lynn, and she suggested checking an electrical store in town. I mentioned it to Verne, and he mentioned it to another friend who also suggested a different electrical store. Verne tried both places, and sure enough, Lynn was right. Verne bought me a new, off brand cord for $14! It fits and works perfectly. We live in a disposable society, where people think having the newest thing will bring them happiness. Sometimes, keeping what's near and dear to us makes us the happiest of all.

While organizing the sewing room I found this cat quilt that I started way back in 2005. I had it all pieced, and hand-quilted when I lost interest in it. All it lacked was the binding. I considered not finishing it, when I was reminded of another project I had thought the same of and decided to bring it to completion. I'm glad I did. I think it's charming once again. Each cat is quilted differently, and the alternating corners have balls of yarn and mice quilted into them. Abigail has claimed it, and uses it on her lap in the evenings while she sits and draws. Chester loves it, too. Lucy? She loves any quilt you lay on the floor.

loving the links for soup recipes..
will be trying that italian sausage number.

sorry to learn about the broken pipes. things like that can sure put a person on edge.

I love this post. I love this time of winter, too, and all the coziness inside. Nothing I love better than simmering dinner all afternoon. . . And GREAT results on your homemade stock! I have been canning my stock this year and I am so pleased with the extra freezer space and convenience of room-temp stock.

I also have been making and freezing stocks. We've been eating a GAPS type diet, and it is heavy on broths. I plan on canning my next batch, as my freezer in the basement died, and I was unaware of it until two days later. I lost all my hard work. :(
So sorry about the broken pipes.
And your quilting skills amaze me!

Happy to have you link up even though I am just now getting around to say so! DO it again!

It is good to catch up with you and I love all the ways you saved money. I have been meaning to try homemade tortillas...they look great!

I LOVE your canning shelf! It is so classy and pretty and functional and impressive looking!

I am wondering...why the fork pricks in the bread? Do you know a secret that I don't? Just curious- I've never seen that before!

I love your canning shelves! Mine is just a plain white bookshelf. Love the photos, Tracy.