We've had a doghouse on our front porch for a few years now. It's lined with cedar chips and the cat sleeps in it year round. This is no cat-sized doghouse, mind you. This is a large house that can easily accomodate an 80 pound dog. Overkill yes, but we already owned it, so...

In mid-October, this chocolate Labrador Retriever showed up in our yard. He isn't the first stray to stop over, but he didn't really look like a stray, either. At least at first glance. And I wasn't touching him. And I directed Collin and Abigail not to touch him. "We are not keeping him".

Day after day, there he was. One morning as I went to go run he was nowhere to be seen. I thought that he had finally moved on, until I discovered that rather than moving on, he had moved in. To the doghouse that is. He was sound asleep. Two days later I set out a bowl of water and food for him. He was looking thin and I took pity. Still- no touching.

Meanwhile, Collin started calling this dog Kanye, pronounced 'kah- nyay', after a rapper. He told me that I could also call the dog by Kanye's nickname, Yeezy. Um...okay. It didn't seem likely that this dog would ever come to either of those names, and I called him Buddy. It's a good general name for a male dog. 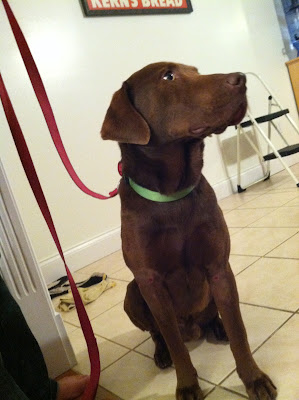 One morning as I went to run, "Kanye" followed along. I have no idea why he came with me this day, but he kept just ahead of me for about a mile and a half where he met  another loose dog. They both wagged their tails, and ran off into a field. I continued on. By the time I completed four miles, Kanye and the other dog came running over a hill. It was as if the other dog, who I see daily, had said to Kanye, "Don't worry- I know where she goes and I'll help you find her." They parted ways and Kanye was slightly ahead of me once more. He kept looking back to check on me. As we came up a hill, a few little dogs slipped under their fence to bark at me as they do more often than not. I kept running, as usual, but Kanye took very wide circles around me, distracting the dogs. He continued to look back to me as if making sure I was okay. When he felt his job was done, he sat in a yard and waited for me to catch up. Although I had never been in danger, he didn't know that, and I praised him. Now he was tagging along behind me.

Not more than a tenth of a mile later, two rottweiler-mixes came running across the field. I run past these dogs every day. While they bark at me, they also wag their tails. I always talk to them as I pass, saying something like, "Good morning, boys!" When Verne, Mac, or  Collin run with me, the dogs get very protective of me, and bark ferociously, without the tail-wagging. I'm not sure if they thought Kanye was a threat to me, but they attacked him. I was way ahead, and didn't dare get in the middle of the situation, but one dog grabbed Kanye's neck while the other straddled him and bit his legs. I thought they would kill him and I screamed. They did let go, and Kanye ran back the opposite direction. I immediately called Collin and had him come for me. Within a few minutes were were driving, windows down, calling for a dog who didn't respond to any name. I had never touched him, but he stood up for me, and I was worried that he'd gone off to die.

We drove a two mile stretch, and I cried. I told Collin to go home, and prayed that if he could, he'd find his way back to our home. 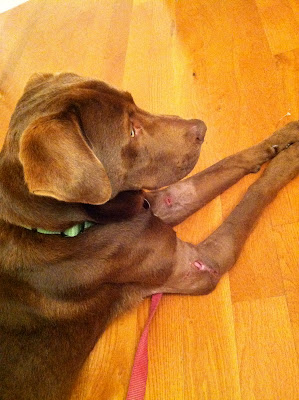 Collin pulled into the driveway and as I got out of his car, Kanye came limping over to me. I was immediately relieved, and started crying harder. I bent down to touch him, and he licked my entire face as if to say, "I'm so glad that you're okay!"

I had Collin carry the doghouse out back, and Kanye immediately went in and laid down while we called the vet. His wounds were deep, and he was in much pain. Off we went, to have his injuries cared for. And to get him shots. Kanye was staying. Outside.

The vet examined him thoroughly, and asked permission to keep him overnight. He was shaved, his wounds were cleaned, and he was started on antibiotics. The weather had turned cold, and I couldn't bear the thought of him being in pain in the cold, and in to the house Kanye came.

We did call the animal shelter to see if anyone had reported him missing, and the vet checked for a microchip. We have no idea where he came from, or what his history is. Consequently, when we tried to crate him when we had to be out of the house, Kanye panicked. He pawed at the crate, moving the bottom pan, and chewed at the carpet underneath. 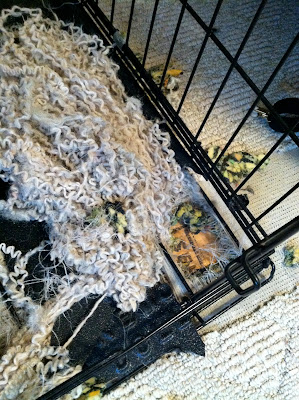 This stray dog has turned out to be very expensive!

Nevertheless, we all love him. He's gentle, and sweet, and has gained 15 pounds in the short time we've had him. 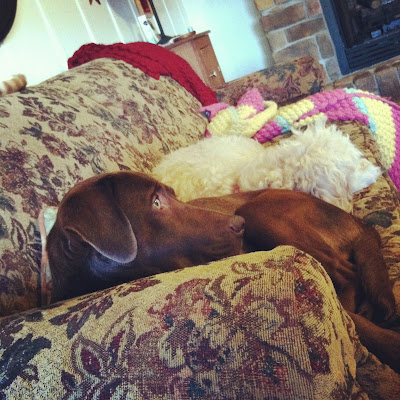 He and Lucy were fast friends, and can often be found hogging the sofa when they aren't wrestling. 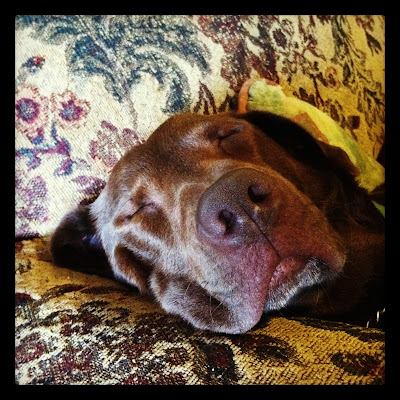 He knows his name, and he knows he's loved. He sleeps with Collin, but doesn't let me out of his sight the rest of the time.

What a precious dog. I'm glad he found you. Dogs can be mighty inconvenient at times...i.e. ruined carpet...but they certainly do give more than they take.

oh Tracy. What a story! He's so beautiful!

What a beautiful dog and such a sweet nature! I'm glad you let him stay. :-)

This is the first time I've written on your blog, but my husband and I are dog lovers and this story melts my heart. Thank you for taking him in and giving him a loving home. I truly believe that they choose us. Angels come into our lives in many ways. Your family is that for him and he has blessed each of you. Thank you for sharing this story ~ my eyes are just a tad misty. This is definitely a story for the books, Chicken Soup for the Soul (Dog Stories).

He is such a darling. No wonder you couldn't resist. :o) I'm so glad he found his home with you. I was always a bit wary of dogs until we came to live here, and the need for a guard dog became obvious. Now we have Stuff, a German Shepherd/Malinois cross, and we're all dog lovers.

I love a good dog story and this is definitely a good one. How is he today? Warm and cozy . . . and not chewing any more rugs I hope?