Verne was in St. Louis for work and missed the race yesterday morning. We looked into races in the area, and I found one that took place today a little over a week ago. He's into the novelty races where you run, eat, and run again. That's right. He's eaten chili buns, which I could barely stand to watch, and today, he took the Krispy Kreme Challenge. Run 1.6 miles, eat a DOZEN of glazed donuts, and run another 1.5 miles to the finish line. Bleh!The chili bun run requires you to eat the chili buns if you want to place. You can do the run just for fun, without eating, but there's no chance of placing. The Krispy Kreme Challenge was opposite of that. Only the top three male and female finishers got awards in the group of people who DID eat. The race without eating was more competitive, and was treated like a regular race. 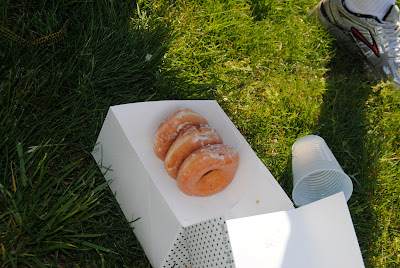 I had no intention of running today, because there was no way I wanted to attempt eating all of those donuts. That is, until late last night, when I found out you could run and not eat. (There were still donuts and coffee at the finish line, but you weren't required to consume them.) When you run races, you almost always get a t-shirt. I'm not much of a t-shirt girl, and I've decided to save all of mine and make a quilt with them when I get enough. Sometimes, if you haven't pre-registered for the race they run out of shirts, and you can't get one on race day. 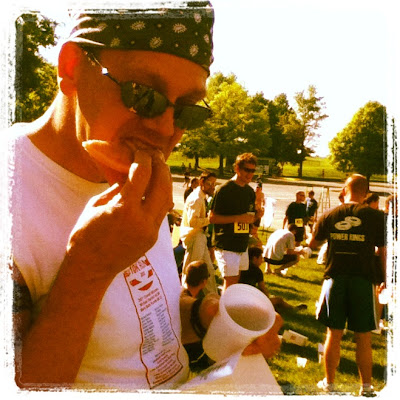 I woke up this morning, and told Verne that if they had plenty of t-shirts, I'd run the race to get one to add to my quilt. If the shirts were gone, I wasn't running since I raced yesterday and had planned to take today off. We arrived, got to the registration table, and found that they did indeed have plenty of shirts. We both signed up. Verne ate; I didn't.
My goal was to finish in 27 minutes, and I intended to run just for fun. We lined up, and because I was near the front of the pack, I started faster than I intended. Not too fast, but faster than I planned. I worried that my legs would be sore from yesterday's race, but they felt fine. However, it was really warm, and I don't like warm weather running. 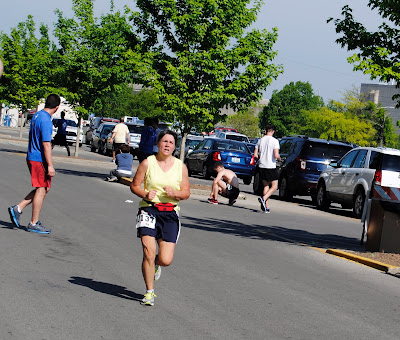 I felt nauseous, and couldn't even imagine having to eat a donut and continue running. I heard my pace on Runkeeper, and kept telling myself that I could afford to slow down and still make my desired time, but I never did. I crossed the finish line, and waited for Verne to come into sight, and began cheering him on. My time? 25:40. I'd kept an 8:15 pace. 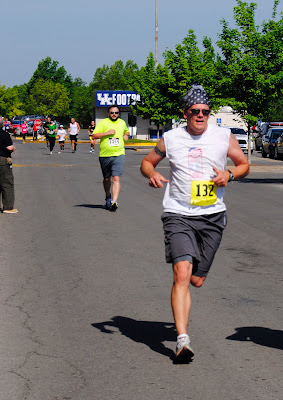 Imagine my surprise when I won my age group again. Seriously, I in no way expected to place, let alone win. Too many people, and too big an age group. My particular group went from ages 39-49. Normally, it goes from 40-44 or 45. 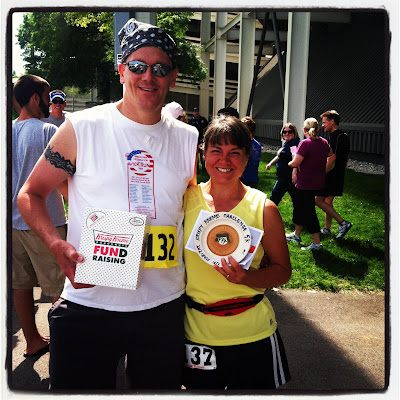 Verne ate his donuts, and kept them all down, though he didn't feel particularly well the rest of the afternoon. His time ended up being 31:59, and that includes eating the dozen of donuts! I think I'll stick to running.
Posted by Tracy at 6:05 PM

Congratulations on your win! This is really a big accomplishment! I sure wish that I had started running years ago. I think I have waited way to late in life to do so. I certainly admire you.

You two are officially amazing and crazy. That is a lot of running...and eating (for Verne).
Great job!