*~ WARNING! ~*
This post contains photos that may upset the faint of heart. If you are easily upset by blood/death, you will want to skip this one.
This Sunday dinner was no usual Sunday dinner for our family, but OH! how I wish it were.
Way back in May, our family became the owners of 12 little chicks. They arrived at our home the day after they were hatched, and we have loved them and cared for them each day- teaching them first how to drink, and then eat, cuddling them close during those first few weeks before they could move to the coop. We check on them constantly throughout the day, providing fresh water, plenty of organically grown food from our garden, and lots of fresh grass. We made sure their pen was large enough to exercise. And then we discovered, as the chicks grew, that two of the twelve "hens" that we ordered were actually roosters. 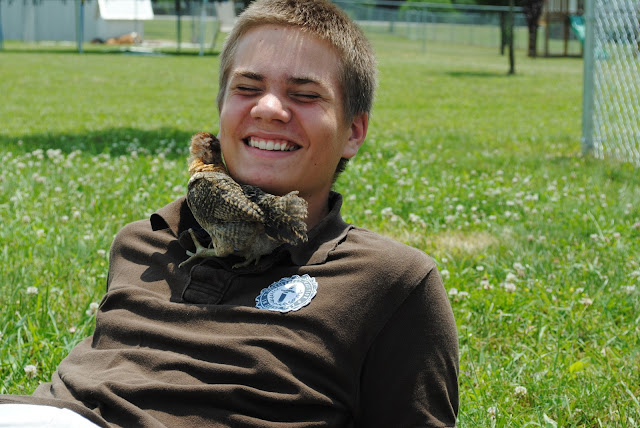 I knew, in my heart of hearts, that one of these fellas was going to have to go eventually, but we played the "wait and see" game. If indeed they could peaceably get along, then we would keep them. If not, one would end up on the table. 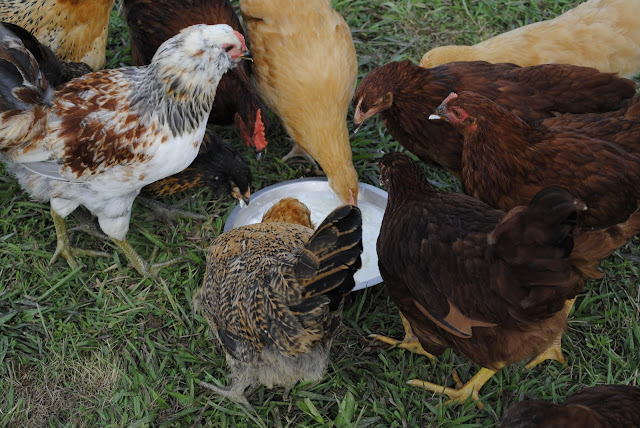 Several months went by, and though I was feeling sorry for the hens, who were getting "serviced" every half-hour, or so it seemed, there didn't seem to be any problems between the two roosters. Until about two weeks ago, that is. I had the windows open, and heard a ruckus going on outside. As I went to investigate, I saw the roosters in the middle of a cock-fight. This wasn't good. The white rooster, an Easter Egger chicken affectionately known as Rosemary (remember, we thought he was a hen!), ended up with a swollen eye, and was walking very carefully after the fight. Penny (remember the hen thing?), had taken the worst of it. His comb and wattles were bleeding and he looked like he'd just lost a boxing match.
Penny has been, by far, the better rooster of the two, always looking out for the welfare of the hens before himself, and I didn't want to see him hurt. Rosemary had to go.
Never having butchered an animal before, I was thankful to know Pete and Julee from the farmer's market. They've been raising chickens for several years, and always process their own birds. They invited us to bring our rooster to their place, and they would talk us through it.
Yes, our children came along. I believe that God gave us animals for many reasons, and one of those reasons is to sustain us. I find it sad that many children, or even adults today, have no idea that a hamburger comes from a cow, or that sausage comes from a pig. Knowing where our food comes from, and what an animal goes through, helps us to be good stewards of what God gives us as well as enabling us to make educated decisions about what we eat.
Rosemary was a much loved chicken. He led a good life- right up to the end, and our entire family agreed that the butchering process was in no way traumatic. In fact, it was very peaceful. 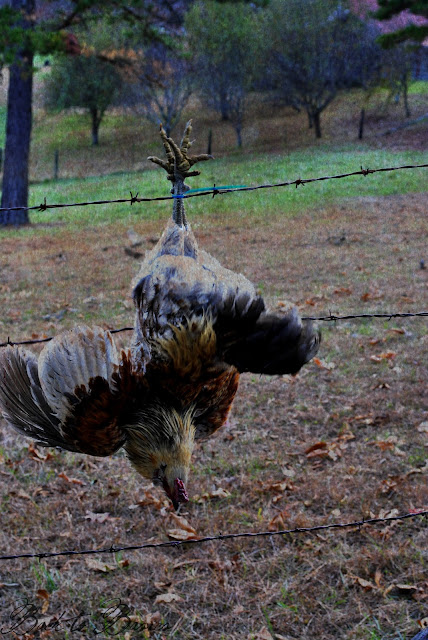 Verne was instructed to hold the rooster by the legs, holding him upside down. This immediately calmed the rooster, and he didn't struggle at all as he was tied to the fence. 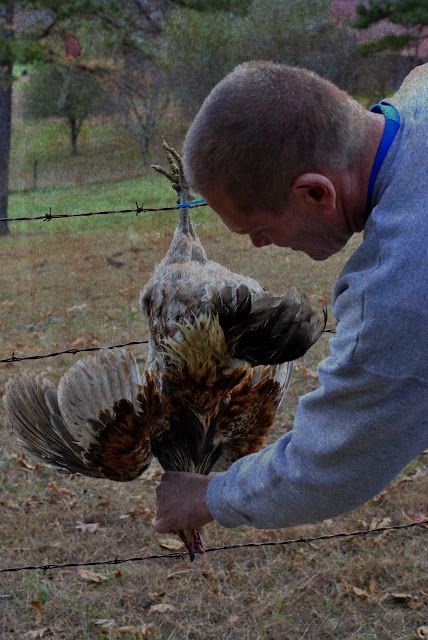 The feathers were pulled down to expose the skin underneath, and his throat was slit. Again, there was no struggle, and this happened very quickly. In killing an animal this way, the blood drains from the meat, and the meat is left very clean. 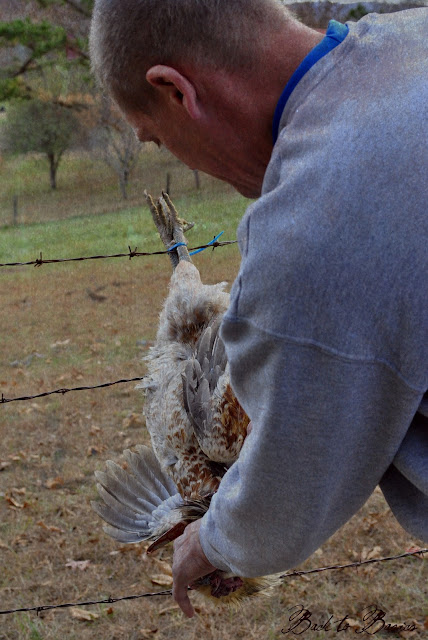 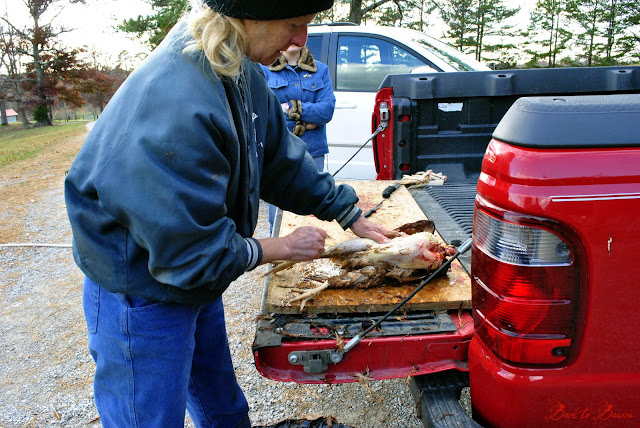 Julee scalded the chicken that they were processing alongside ours, and began plucking feathers while Verne scalded our rooster. 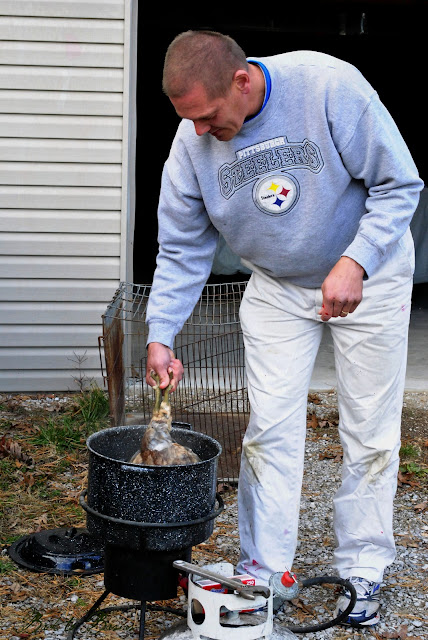 The feathers were plucked, the rooster was butchered, and immediately refrigerated. 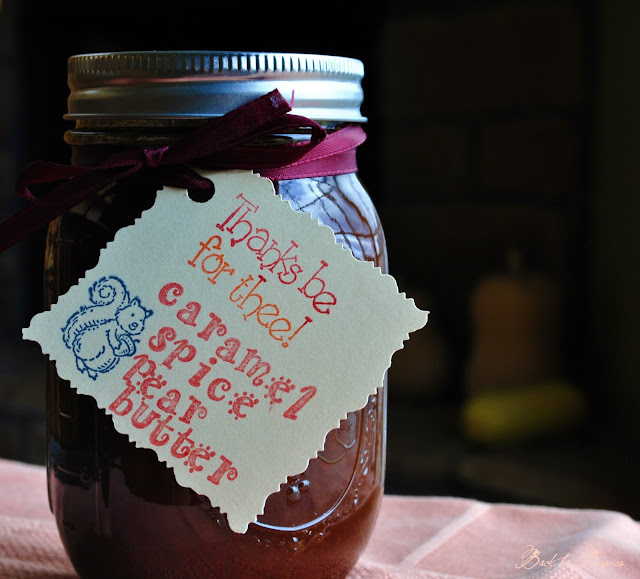 We left Pete and Julee with a jar of Caramel Spice Pear Butter as a thank-you for having us. 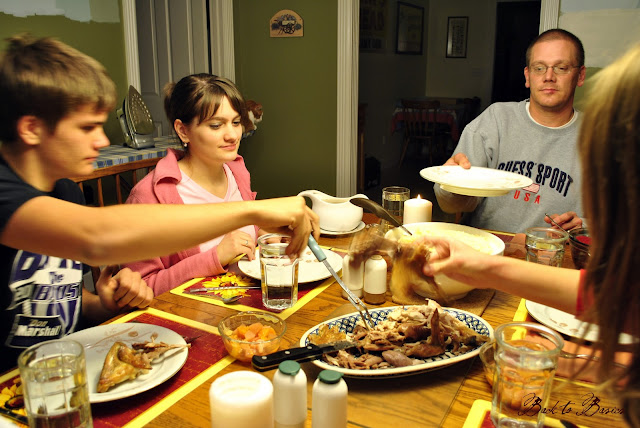 We all anticipated Sunday's dinner when we'd be eating our own meat. Not only that, but we had potatoes from our garden, our own beets, and home-canned fruit for dessert.
I can't begin to describe how satisfying it is to partake of a meal that you have raised in entirety. We felt like it was Thanksgiving a few weeks early. 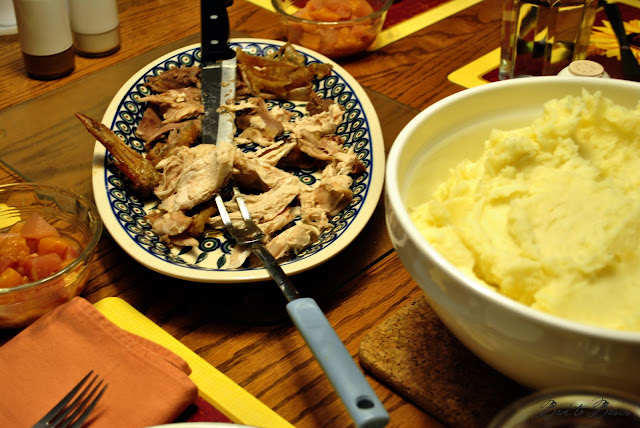 Keeping it real, folks! Don't you love the ironing board set up in the dining room while we ate? and the color splashes on the walls? I'm trying to decide a new color, and painted swatches to get a better feel for the colors. It's so much better than deciding off of a paint chip!
Posted by Tracy at 3:39 PM

We butchered a few of our chickens years ago, but have not done any since. I would like to someday raise some meat birds to fill the freezer with!

That was actually very interesting. For some reason, I thought chopping off the head was the way you kill them. That would be satisfying to eat everything you raised or grew.

I love it all, Tracy! The bird, the ironing board, the paint chips!!! Y'all are just awesome! :-D I think you need to change the blog name from "aspiring" to "bonafide!" :-D
Blessings,
Mary Lou

How cool! Not sure that I could eat one of our chickens....but I sure do like their eggs.

My boys all came running when I read the disclaimer out loud:-)

I didn't even notice the iron... or the paint... just a beautiful table with a happy family!

Mary Lou, But, I don't have a farm! One-half acre hardly qualifies me to be a "bonafide" farm girl. At heart, yes!

Danielle, That's hilarious! While I thought I really should write a disclaimer, I figured most people would be too curious to turn away.

I remember grandma and momma wringing their necks and then hanging them on the clothesline.
Really enjoyed this story.....even though I have decided I will never buy a whole chicken again...just breasts and legs and wings
Paula

Good for you. I want to be able to do this someday. Right now the zoning is against chickens in our city, but we're working on it.

I like your real dining room! Hope you show the new paint color sometime.

Tracy, I was bracing myself for what I might see lol. I am not good with blood and guts at all! But, this post I could handle easily :D

So tell me... what do you call this dish? Rosemary chicken? hahahaha... sorry, couldn't resist ;)

Very cool! I had no idea that was the process! The meal looks yummy!!!

That was very interesting, Tracy. Have you read about the Whizbang Automatic Chicken Plucker that you build yourself? Here is the link if you're interested. Your meal looks delicious.