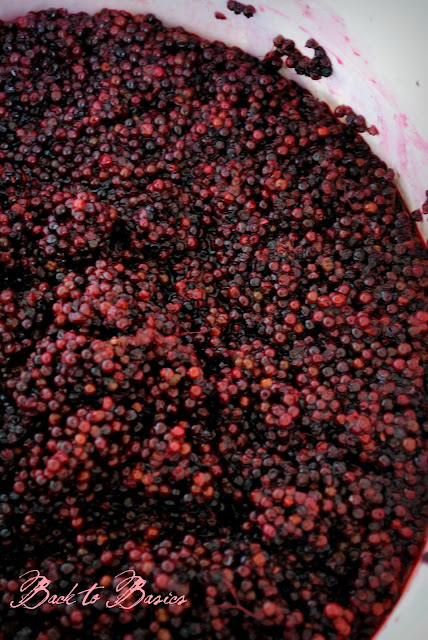 Bartering has become as much a part of attending the farmers' market as buying and selling. Though I offer 19 varieties of jam, a certain man browsing my table was unsatisfied.
"You don't have elderberry?", he inquired. I began to explain that I didn't have a source for elderberries, though they were plentiful in Pennsylvania, my native state. He asked if we might barter. He'd bring me berries in exchange for a few jars of jam that I would produce with them. Deal.
Two days later, Otis arrived bearing two five gallon buckets of berries. Two days after that, he arrived at my table to pick up his jam. The following week, he arrived with two more buckets of berries. And a bottle of homemade wine and cups to serve it in. Several of us had a good chuckle about that. He took more jam, and left me with berries and the wine. 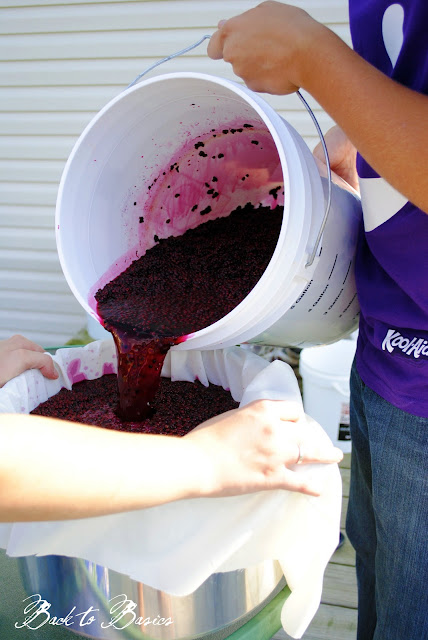 It's been several weeks since the first exchange, and each week, Otis shows up with more berries. To my husband's and sons' delight, he has taken to removing them from the stems for me, and brings them tidily in Ziploc bags. Last week he brought me some frozen deer meat as well. That day he went home with bread, jam, and dessert.

I've been verbally given Otis's recipe, which turns out much lighter than you'd think for elderberry wine.
Twelve days ago, I combined the berries with filtered water and sugar, and set it to work in an ale pail. It's been stirred daily, and tickles me as the natural carbonation works the fruit.

Today was the day to strain the must, and fill the carboy. More water, more sugar, more love. 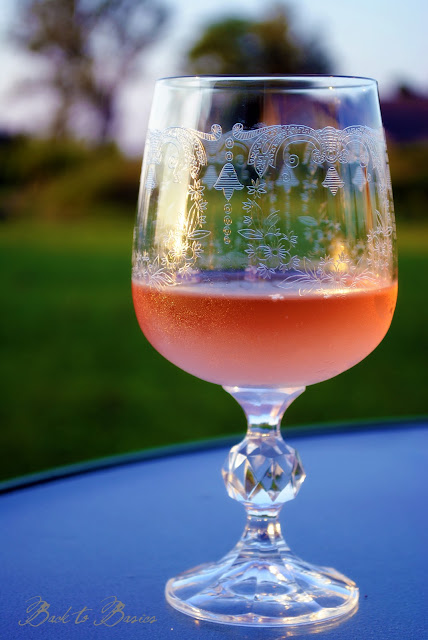 I hope that in 8-12 months mine tastes as good as his.

You make springs gush forth in the valleys;
they flow between the hills;
they give drink to every beast of the field;
the wild donkeys quench their thirst.
Beside them the birds of the heavens dwell;
they sing among the branches.
From your lofty abode you water the mountains;
the earth is satisfied with the fruit of your work.
You cause the grass to grow for the livestock
and plants for man to cultivate,
that he may bring forth food from the earth
and wine to gladden the heart of man,
oil to make his face shine
and bread to strengthen man’s heart.
Psalm 104:10-15 (ESV)
Posted by Tracy at 8:56 PM

How sweet of him to bring you so much in exchange for what he wanted from you. Your table must have really tempted him with the breads and jams. :)

What a fun post. I can nearly taste the tartness of these berries from your great photos.

How lovely...a simple request has turned into a friendship of sharing.

how amazing (the making of wine) and how very wonderful you've developed this pleasant barter system. loved this post, tracy. my new post is not nearly as interesting - it's about my favorite sponge. edge of your seat kind of stuff. hm.

That sounds delicious! Boy, he must have *THE* spot for elderberries.
Found this recipe this morning, and if you're still up to your eyeballs in pears, it might be a fun one to try:

Tracy, thanks for the visuals. Otis sounds like a real treasure. It's nice to find a bartering friend.