On Friday, June 15, 2012, I was traveling to Dayton, OH, after spending a week at my parents' home in Pennsylvania.  I was meeting Verne and Mac later that evening, and we were scheduled to run a race the next morning, and attend the wedding of a family friend in the afternoon. I had just pulled into the Lodi station Outlets to get something to eat and use the restroom when my phone rang. It was Verne.

His voice was quavering, and he told me that a woman had been murdered while she was out running the previous morning. I had been out running the previous morning. Sure, I was several hundred miles away from the crime. Sure, people are murdered every day. We're not supposed to get used to that fact, but this left me feeling vulnerable. Evidently, I wasn't the only one.

Sarah Roberts Hart was a 31 year old mother of three who happened to be pregnant with her fourth child when she was killed. Immediately, a small town rallied, and runners from around the globe united to honor her memory. A race was organized, and over 3,000 people signed up to participate in either the 1.5 mile fun walk or the 4 mile race. There were participants from every state, and many from other countries. Some of these people were "virtual runners". That is, they signed up, and were sent a t-shirt just like the local participants, and walked or ran on their own. Over 2,600 people showed up today, and over $70,000 was raised to start a scholarship fund in Sarah's name.

While the race was intended to honor Sarah, her husband spoke very briefly and said that Sarah wouldn't have wanted that. She would have wanted Jesus to get all the glory.

It was an emotional day to be sure.

The day after hearing of Sarah's death, I ran my fastest 5k ever. I cried while I ran, and my legs carried me swiftly. I was tired this morning, and wanted to slow down. I kept thinking, "This race is called Run With All Your Hart". And, "Sarah fought with everything she had to stay alive, not only for her own life, but for that of her unborn child".  My legs carried me swiftly again this morning. 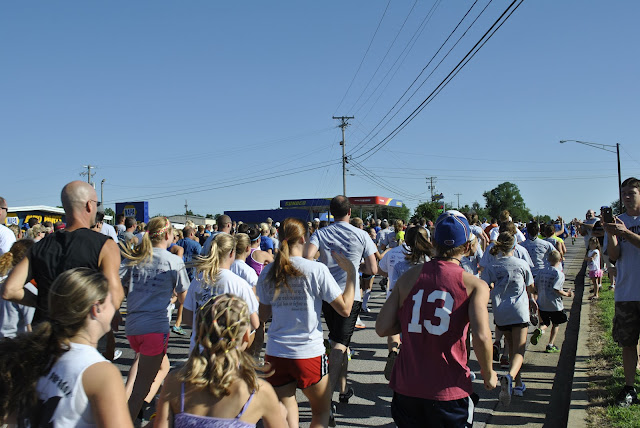 Abigail was our official photographer since she's suffering from a sprained ankle, and captured a bit of the start. 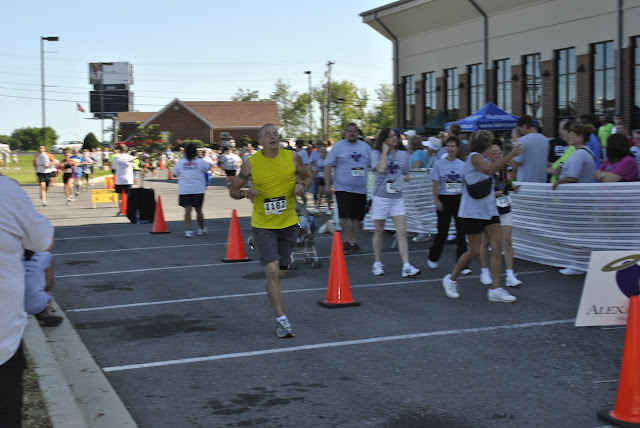 Verne finished exactly one minute ahead of me. 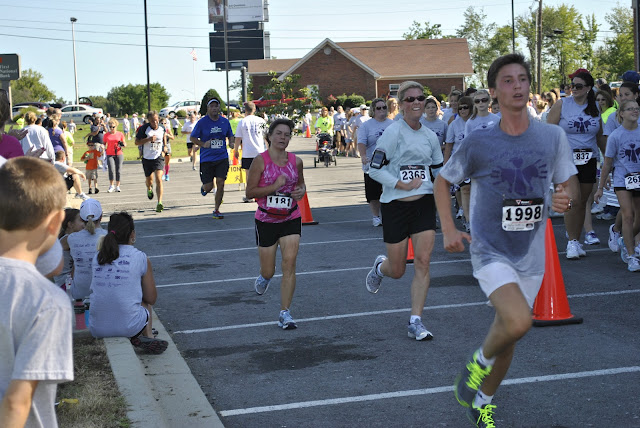 Though I did "run with all my heart", I couldn't catch the woman in front of me. It turned out to be okay... she wasn't in my age group anyway. ;-) 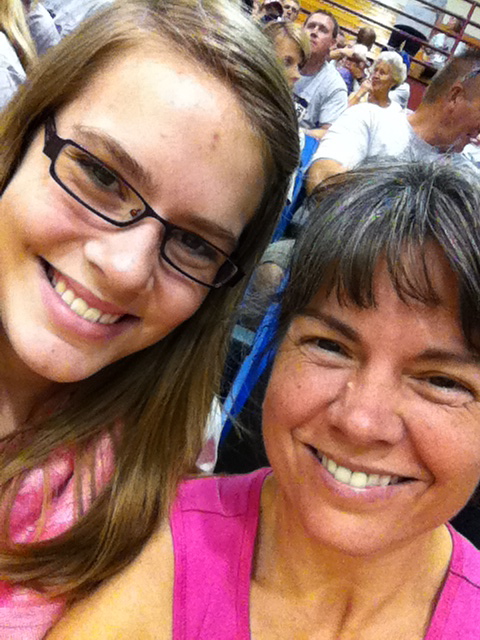 Abigail and I waiting for the awards in a very crowded auditorium close to noon. Many said it looked more like a state basketball tournament than a race, and they were right. 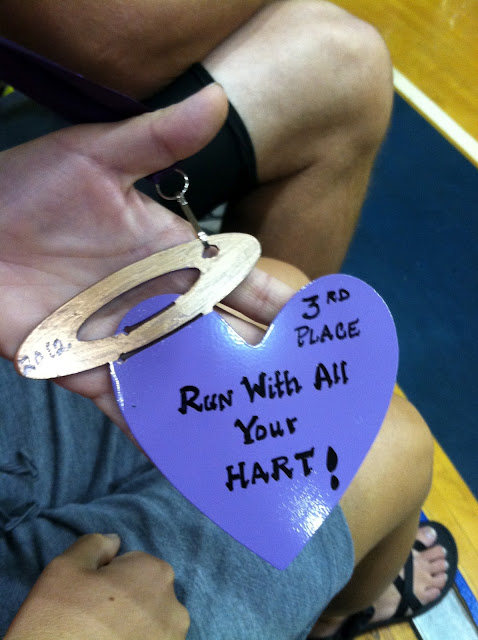 I never expected to place in such a large race, but I came in third in my age group. Turns out it was a really good thing that woman ahead of me wasn't in my group- I would have gone home empty-handed. Honestly, though, it would have been fine. My heart was full enough. To God be the Glory!

This race reminds me so much of Joseph's story in Genesis. His brothers were jealous, and intended to do him harm, but Joseph survived and was able to save the people in the midst of a famine, with God's help, of course. Sarah's attacker meant to do her harm, and he did take her life that day. Thankfully, she knew the Lord as her savior, and she continues to live, though not on this earth. Her memory lives on, and because of the evil that was done to her, others will benefit by receiving scholarship money for years to come. Not only that, and more importantly, others will benefit as they watch Sarah's family live with grace. Yes, they are grieving, but they are not bitter. Their faith is shining, and is an example to thousands.


Several hours after the race, we arrived safely back at home, got cleaned up, and rested for an hour. There was another race not too far away, and Verne wanted to do it. I'd never raced in the evening, but agreed it would be fun. It was only two miles. I always run farther than two miles. How hard could it be?

Not knowing how my stomach would cooperate with the change in schedule, I had a cup of coffee, and a bowl of watermelon. Nice combo, huh? 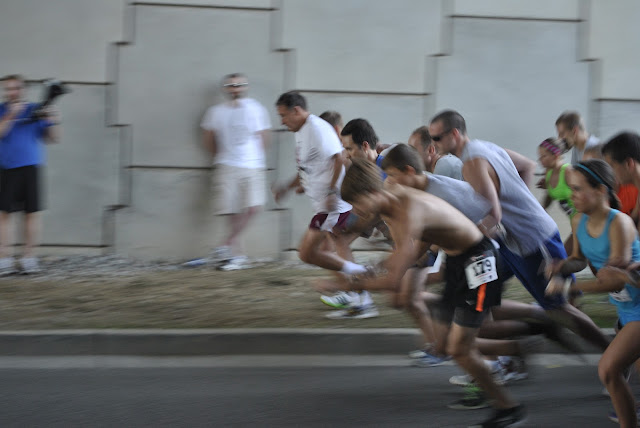 Once again, we lined up, and were off. 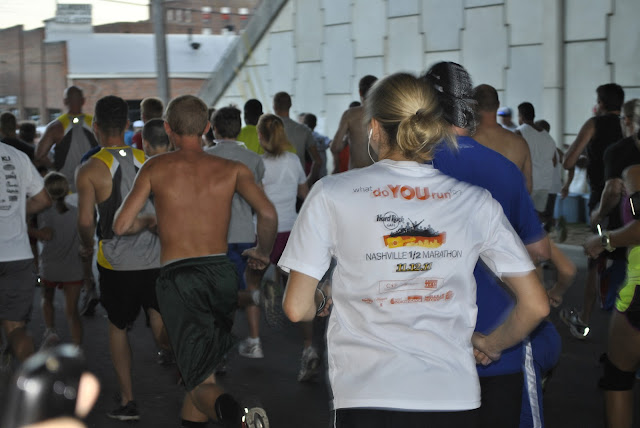 Several hundred of us, running the streets. Crazy, I know. Because I had run hard this morning, I planned on doing this race just for fun. Then I found out that a young girl from the track and cross country team that Verne and I coach was running, too. Well, I couldn't let her beat me.

She lined up ahead of me, and actually was ahead of me for a bit, but I was persistent, and steadily gained on her.

Those two miles turned out to be my fastest two miles ever. I ended up with a pace of 7:16 per mile. 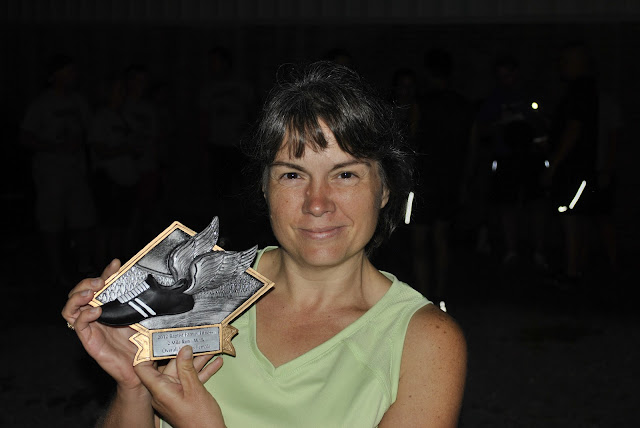 I was the first female finisher over 40. 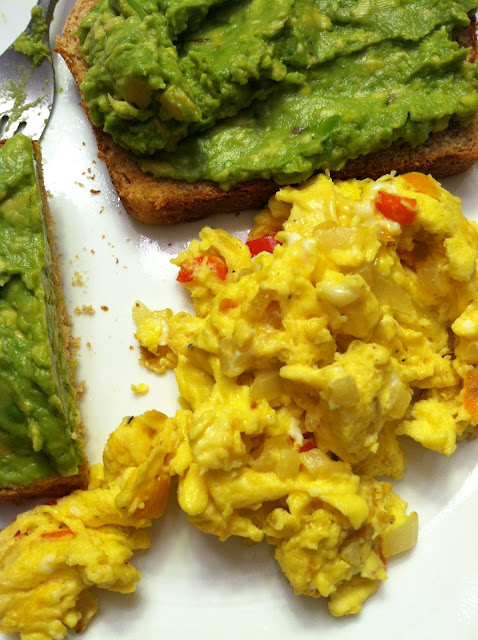 It was 10 o'clock before I had supper. Verne scrambled us some eggs with onion and peppers while I made toast and smashed some avocado for on top of it. Boy, did that ever taste good! I think I'll sleep good tonight.

It is amazing what motivation will do for us. Whether it is the emotional sadness of a life stolen or another friend who deserves a good challenge. Sounds like you had a wonderful day with your family and friends. Always be very careful, my friend.

Sarah's story is amazing, and I am thankful she knows Jesus!

You are amazing. I'm so sorry to hear about Sarah Hart. You inspire me, really, Tracy, with your big heart and energy. Hugs and blessings to yoU!