We are the Champions!

Two years ago now, my husband had a dream. Verne took Collin and Sam to a 5k race, and Sam won. The entire trip back, Verne's wheels were spinning.

What if he could put together a cross-country team for home schoolers? He asked the boys what they thought, and they quickly became excited. Cross country led to basketball, and then track.

This was our second year, and we added girl's volleyball to the mix. Last spring, Verne took 9 children to the state meet for our conference. This year,Verne and I coached 63 children on the track team with the assistance of our friends Julie and Denny. Sixty-three!

Last Friday, 27 kids gathered at the state meet to compete for our team. (The meet was varsity level, but we took a few younger ones that we knew could hold their own in the competition.) 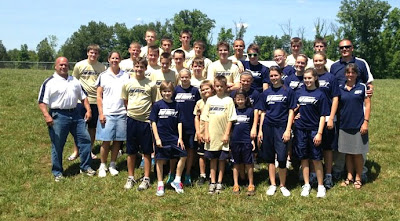 The above photo was taken just as we were all leaving to head to the awards ceremony after the competitions were over. 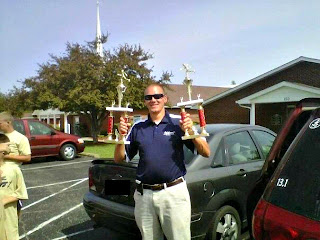 And this one? This was after we found out that we were the champions for BOTH the boy's and girl's teams. What an emotional day! I'm so proud of Verne. He puts a good 20 hours a week into this dream,  and it has really paid off. Seeing the smiles on the faces of these children was even better than the trophies we received. Good work, team!

Congratulations to you and Verne, Tracy!

Awesome! Congratulations to you both!

love this!!! Time and dedication invested in young lives that will impact them forever!

Congratulations! What a great experience!

Congratulations!!!! That is awesome!