First, you should know that I'm a dog lover, and I firmly believe that most dogs are very sweet. I also believe that there are many, many bad dog owners. I think our society has gotten way out of control in the fact that we care more about animals than humans.
This morning while I was running, I encountered three dogs that I've encountered quite a few times in the past. They've barked before, but that's been the extent of it. Until today.
I was surrounded by the pack, and bitten twice. Once on the leg, and once on the backside. And believe me , it HURTS! 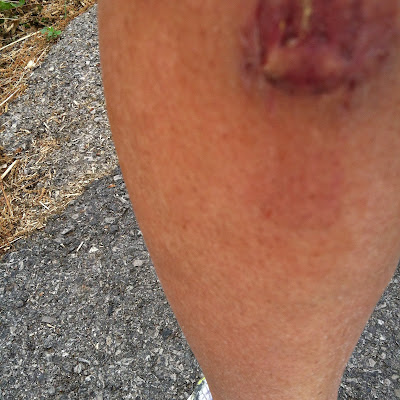 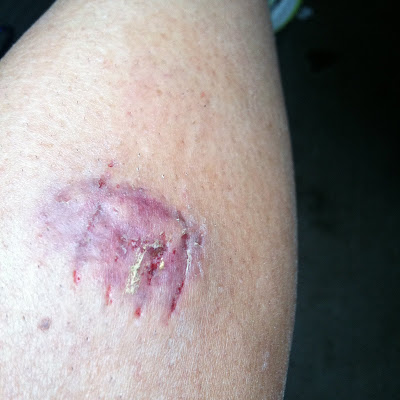 Thankfully, I called home, and Verne was able to come and get me. I called Animal Control, and they went out to get the dogs. The owners pled innocence, and Animal Control was only able to take one dog, as the other two were "missing". I think they were inside the residence.
Unbelievably, after a ten day quarantine, the dog will be returned to the owner and it will be able to torment passersby once again.
PLEASE, I implore you, tie your dogs. I feel very blessed to have gotten away with just two bites. It could have been much worse, but it shouldn't have happened at all.
Posted by Tracy at 9:04 PM

Oh how terrible! I am an animal lover myself, but those owners should have been gotten in much more trouble than that.

I think you need to start carrying some pepper spray with you when you run too.

I'm so thankful that you weren't hurt any worse Tracy!! Loose dogs are a nuisance and dog packs are downright dangerous!! Keep that pepper spray with you at all times!!

In our neighborhood a deputy sheriff has 4 pit bulls and one of them has a new litter. Over the years they have "charged" me three times, every time while they were out with the owner. He put up a fence but they got out in January and chased an 80 year old neighbor into his house. That neighbor filed charges. Since the dogs hadn't bitten anyone (yet) the judge couldn't do anything. Thankfully the owner has now put up a 6 foot privacy fence so the dogs can't see us as we walk by - no more barking and running up and down and we're all praying that fence will contain them. It's a scary thing when animals of any kind get better treatment by the law than their victims do. blessings, marlene

So awful. I'm very sorry this happened to you.

I am so sorry Tracy....it looks painful.

Oh ouch Tracy!
Our pastors daughter was bit by their neighbors dog (a LAB, how often do you hear that?), and the neighbor also claimed innocence. Did they think she bit herself in the face? I'm not sure what happened in their case, but wow that stinks for you!

Sorry you were bite and hurt Tracy. We do not own dogs ourselves and I know when I was walking I found it very annoying to have various dogs running along fence lines and barking at me and people certainly have a responsibility of containing vicious animals of any kind.

i was at the riverwalk this weekend and a guy's dog had been attacked by a pit bull and was unable to walk at the time. the pit was unleashed and the owner pretty much acted like it was no big deal. it's a good thing it wasn't a small child that it attacked. crazy!

Tracy, that must have been very scary as well as painful. I sorry.

First off I LOVE your header!!!!

OUCH! You poor thing. I'm thankful as well that it was not worse.

I have a cousin who had, yes had, two huge dogs that attacked their mailman. It actually went to court and the dogs were put down. My cousin saw these dogs as his kids, but the mailman was seriously injured.

We love our pets, but you are right, tie up your dogs!

I love reading your blog! (I'm a friend of Bonnie over at Crabapple Pond)

That's horrible you were bit! I agree with the above comment, you should get a small canister of pepper spray, and don't be afraid to use it! I always carry a tiny one with me when running. They don't cost much at all. Glad it wasn't worse!