This is the first break during Mac's college career that he decided not to come home. He had the opportunity to travel to Florida with friends during spring break, and decided to take it. We didn't blame him one bit. Because I hadn't seen him since the beginning of February, and Easter seems so far away, I thought maybe we could squeeze a quick trip in to see him before he left town. As I was perusing a local race calendar site, I noticed a trail run just a little north of Mac. I immediately called him and asked if he might want to join me in a 10k run before he headed south. We both quickly got excited about it, and started counting down the days.
When we woke yesterday morning, I had an email from my friend Paula, who happens to own the quilt shop where we meet to sew every Friday. I'd be missing the fun this week to make the trip west to visit Mac, but I hadn't let her know. In any case, she was informing us that she decided to close the shop for the day because of the impending bad weather. Wise choice.
Meanwhile, Verne and I packed our bags, leaving Autumn, Collin, and Abigail here at home. We called throughout the day, very frequently, I might add, to check on the status of the weather. At one point, we were stuck in a store several hours away from during a tornado warning in the town we were in. Upon calling home, Abigail happily reported back to us that the skies were blue, and the air was calm.
Collin was at work, and was asked to take a fellow employee home. Another co-worker was afraid to go home during the high winds. Collin offered to drive her home, too. She thought the offer over, and decided it was best to stay put. As Collin dropped the first co-worker off, he learned that a tornado had touched down just where he had offered to take Jessie. There's no doubt in my mind that God protected Collin last night.
It's difficult to be several hours away, and to learn that your children are so close to such destruction. It causes one to pray, and to pray hard. 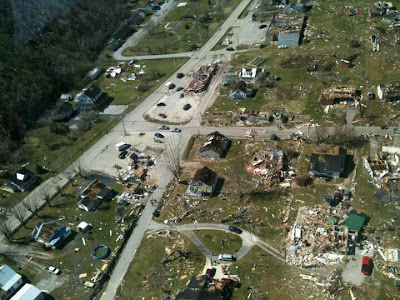 This is an aerial view of the town just to the north of us. The town where Paula's quilt shop (and residence), and Collin's co-worker, Jessie, resides was devastated. Sadly, homes were destroyed, and several lives were lost. I'm so very thankful that those whom I love are all safe today. I'm praying for those who can't say the same.
Dawn came early this morning, after we shared a hotel room with Mac last night close to the site of the race. We all climbed into bed late, and continued to talk into the very early hours of the morning, us in the bed, Mac on the pull out sofa, finding so much to say to one another that it was impossible to fall asleep. Hello 3 A.M.!
I woke shortly after 6, and felt a little queasy from the lack of shut-eye. The air was chilly, but the sun was warm, and before long, we were off, running into the woods, through mud from the heavy rains of the previous day's storms, over rocks, up hills, and across fields. I felt surprising strong.
Mac met me with about .3 mile to go, and ran to the finish with me. As we ran, he explained that he had crossed the finish line first, but actually only ran 4.9 miles. Somehow he missed a turn, and his race was cut short, disqualifying him. BUMMER! Had he finished properly, he would have taken third place overall. So sad!
Not only that, but Verne was running the 5k race due to a torn/pulled hamstring that he's recovering from. He missed a turn, and ran too far! Not a good day for the male runners in our family.
I did the appropriate distance of 6.2 miles, finishing about two minutes shy of an hour, and took first in my age group. The looks on Mac's and Verne's faces were reward enough, but I got a nice little medal to show off, too. We showered, had a leisurely lunch, and said our good-byes as we headed east, while Mac went south. I hugged Mac, got into the car, and cried. He won't be home this summer, either. Oh, sure, he'll visit now and again, but he landed a job in his chosen field this past week, a full year ahead of graduation, and will be staying close to the college campus this summer. I'm so happy for him! So proud!
It's a wonderful thing to not only love your children, but to like them, too. It's a joy to be able to spend time with one another, and enjoy every minute of it. I'm a blessed woman, and I know it. Don't hesitate to tell those whom you love that it's so. You might not have tomorrow to do it.
Posted by Tracy at 6:43 PM

I've already said it but I am so thankful that you all are okay. Sorry about the losses...was Paula's shop devastated? Jessie's home?

Go you! And Mac looks great too. You are so inspiring!

AMEN to every part of this post, Tracy. Our Jacque and granddaughter Jessica were in Katrina so we know what it's like to not hear from them for 3 days and then help them re-build their lives after losing EVERYTHING material. But material things can always be replaced but life, family and love are what count. I like you am a blessed woman who knows that.

I am so sorry for the loss of lives in this town. Thankful that your family was safe and that God had his hand on them..
You both look great and big congrats on doing so well. Family time is very important and I am happy that you were able to spend some time with Mac.
Blessings.

Such a bitter sweet post, Tracy. Great job for you... those guys just need to follow directions:-) haha!

Praying for those affected by the storms!

You've got it all right. Love this post. Sorry for all of the destruction but so very happy that all of you are safe!

Congratulations on the run! I am so impressed! Do you run the whole time or switch to walking when you can't stand it?

Also-I got the most wonderful surprise in the mail today and with it, a bit of my letter-writing joy has returned. (February was a hard month for me and I wasn't in the greatest frame of mind to write letters.) NOW, thanks to you, I am looking forward to this evening to sit down and write.

Thank you Thank you Tracy! You really MADE this day.

Rebecca, I'm SO HAPPY that you received your package today! I had it ready, with the exception of ironing, and kept putting it off until I thought, 'She can iron this! She's rather have it than not!'

I'm very proud to say that I can run that distance without stopping. Actually, I've run 15 miles without stopping to walk AT ALL! What a year it has been for me. Now, for the truth telling. There was one hill in the race on Saturday, that I was almost the entire way up when I felt like I was hyperventilating, and made myself walk (not more than a minute) until my breathing slowed, and I started running again.

oh Tracy. This post touches me - sending prayers for you and for others.

I'm so impressed by your race!! I did not know you had gotten so proficient :)