A Cache of Eggs 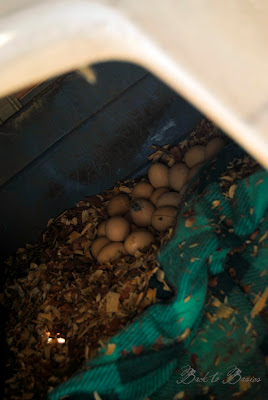 Verne opened the door to take Lucy out, and found a broken egg on the front porch. He inquired as to whether someone had dropped it while carrying several in. When everyone denied the dropping, he went back out to hose the porch down. It was then that the hen came flying out of the old dog house that's kept on the front porch for the outside cat to take refuge against the weather. A little investigation led to the cache she's been keeping. Twenty-one eggs were all piled up at the back of the dog house. Turns out she's been sharing Casper's bed for quite some time. Who knew cats and chickens would cohabitate so nicely? Not I!
Posted by Tracy at 2:57 AM

Oh my goodness. She had a very good thing going there....lol.

Chester is a very nice cat to share his space with her....

thank you for the early morning chuckle. needed that. :o)

cats and chickens.
yes, who knew?!

I would have never guessed that either!

I was wondering how your other two fur-babies are doing?

Michelle ~ Blogging from the Boonies said...

Wow, what a collection!!