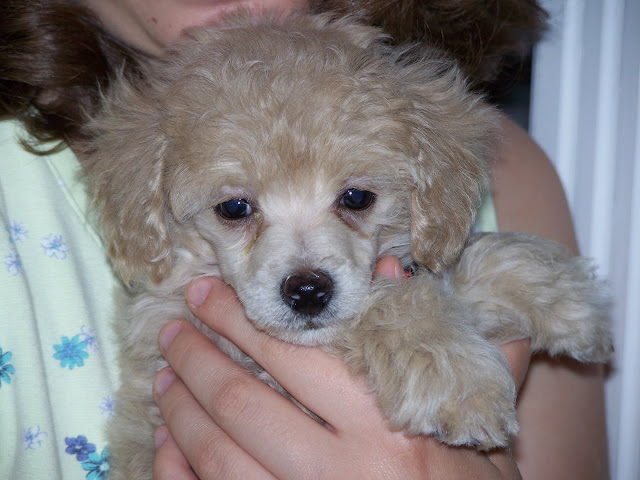 Though she had papers she came from the flea market, not a reputable breeder. It was a warm June day four summers ago, when I picked her tiny body up and held her close to me. She licked my face with her pink little puppy tongue, and I hesitated to give her back. We were headed to the car, and she was filling my thoughts, but I didn't say a word. After I buckled my seat belt, Verne asked, "Aren't you going to bring your dog home?"

I was back to the seller before you knew it, and claiming her for my very own. She nestled down into my lap, and made herself at home. And I named her. Daisy.

It wasn't long before we realized how smart this little pup was. She was learning new tricks by the day and was obedient for each one of us. She learned to sit, stay, come, roll over, dance, balance, shake, and her favorite trick, jumping through a Hula Hoop. Anytime the hoop came out, she wagged her little tail and got very excited. 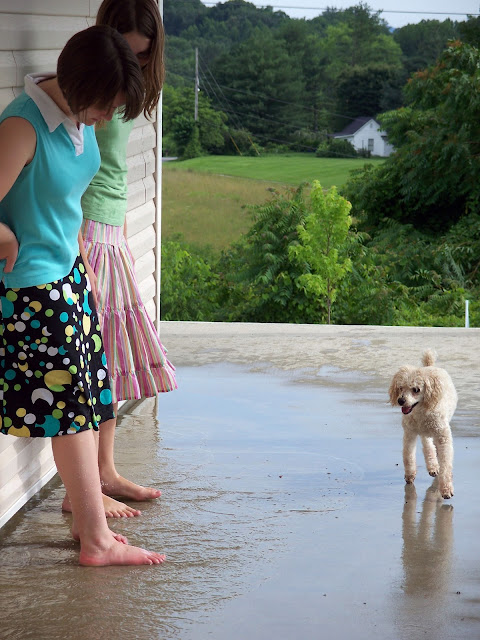 She had a crate in the corner of our bedroom where she slept each night, but before too long she made her way into the bed, curling up by my side and snuggling close. If I moved at all, she'd move right back up against me.

Shortly after her first birthday, we noticed Daisy's lack of enthusiasm for the Hula Hoop trick. She got excited when we brought it out, but seemed hesitant to jump through it. Occasionally we could coax her, but not for long. It was then that we noticed her bumping into walls at certain times, particularly if the lights were low.

A trip to the vet confirmed what we suspected. Daisy was going blind. She had severe cataracts, and couldn't see well. The vet told us she'd be totally blind within a year, and that she would have severe discomfort, but that there was nothing to be done for her. "Take her home, and continue to enjoy her", we were told. 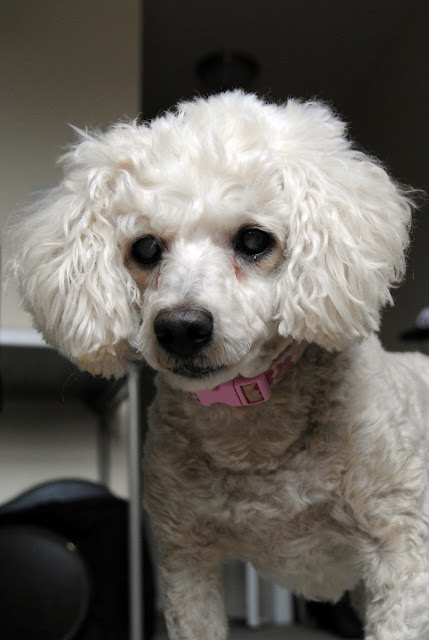 We've been amazed at how well Daisy has coped. She knows our home well, and only very occasionally would she run into a wall. As long as there weren't stray objects around the house, she was fine. She continued to play fetch, tirelessly.

As well as she was coping with the loss of her vision, she was still in pain. She rubbed her eyes and the top of her head with her paws trying to alleviate the pressure that was built up. She tired more easily, and  became jumpy, barking at every little sound. And worst of all, she started snapping once in a while when she was startled.

Last evening, she was startled by a noise outside, and when Autumn tried to pick her up, Daisy bit her. She was very sorry, and put herself in time out under my desk, but it had already happened. Sometime in the night, Daisy left our bed and went to sleep with Autumn. She had never done that before, and I think it was her way of apologizing.

Nevertheless, I called the vet this morning, and made an appointment to have Daisy put down. I couldn't take a chance that she'd bite again, no matter how sorry she was. I held her as she passed, and I cried.

She was giving me those little puppy kisses right up to the end. I miss her terribly already. 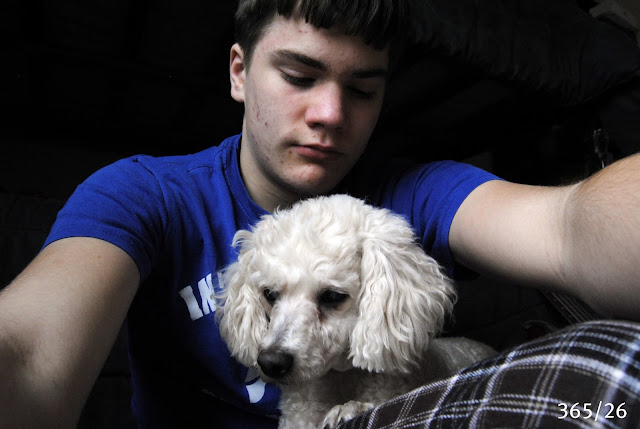 Collin had the foresight to take quite a few photos this morning, and I'm so glad that I have those to remember her by. She was a good friend, and I'm going to be lost without her.
Posted by Tracy at 4:50 PM

I am so sorry for your loss. I know exactly what you are going through. We've had to say goodbye a few times ourselves. No one can understand like another dog lover. I hope you will continue to enjoy wonderful memories of her time in your family. You'll always have those.

Oh, Tracy! I'm so very sorry -- for your whole family! You'll miss her noises and her comforting presence. There's nothing quite like the love of a sweet dog.
You also made a very hard and good choice. I hope Autumn is OK -- emotionally as well as physically!
Love you all!
Mary Lou

i'm so sorry, tracy.
crying along with you.
i've been there - even after
almost 13 years of katie's
passing, i cry. so loved.

I am crying with you right now. I've been there....it is one of the hardest things we will ever do. It was the kindest thing for Daisy though. I am so very sorry!!

Mom and I just read your post! Oh, we are so sorry....tears filled my eyes when I read about her licking you at the end...

I'm so sorry for your loss.

I'm so sorry to hear of your loss. I can tell Daisy was a true treasure of your heart.

My heart is breaking for you. Our pets are like family and I know you are hurting so bad. Hope you have a cemetary for them. Julie takes "Mi" flowers almost every month. We also had to have a funeral and then Julie looked at me and said, what sing?? So then we sung Amazing Grace. One of the dogs stood with us and even cried. You'll never forget your baby!!! Paula

Oh, Tracy, I'm so sorry to hear about Daisy. I can tell she was very special to you. It's funny how pups have a way of becoming so much a part of us that when they are gone, it feels like they have taken a piece of our heart with them.

They creep into our hearts, and stay there forever. They bring joy and they do not ask for much. The lost of a dear pet is hard to do. I am sorry for your lost.

I am so sorry Tracy!

I'm *so very sorry* Tracy, I am sitting here at my computer crying with you.

We went through this with our cat last year and will probably be going through it again with our oldest dog soon.

Even though Daisy had some difficult health issues, what a *blessed* dog she was because she got to go home with your wonderful family and have the BEST life she could have possibly ever had.

Oh, I'm so sorry. What a precious story of first seeing her, and her last few pictures with the kids are beautiful.