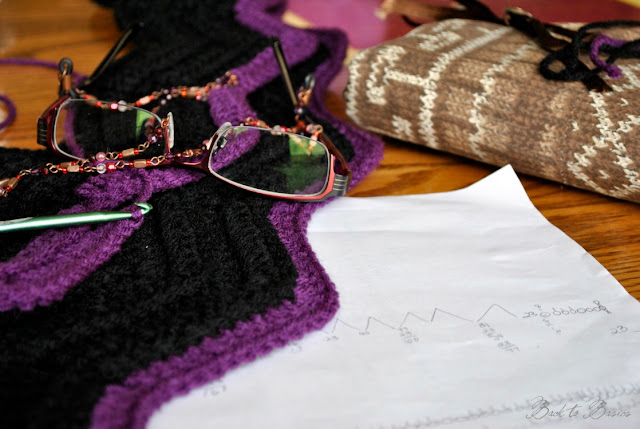 My brother expressed interest in several crochet projects that the girls and I had finished while we were visiting in Pennsylvania for Christmas. It was then that he revealed to me his penchant for homemade afghans. So much so, that he was tempted to raid a thrift box bin when he saw an afghan hanging out of it. I told him I'd gladly make him one, though it may take some time for it to be finished, and asked him for color preferences. His wife, being an avid Steelers fan, suggested black and gold. He smiled slyly and said, "How about black and purple!" I don't know what he was thinking, except maybe he doesn't want to share and didn't think his wife would ever wrap Raven's colors around herself.

I called him when I returned home just to make sure of the colors, and he insisted that yes, black and purple were what he wanted. And so, it has begun. It's actually a striking combination. He chose well.
Posted by Tracy at 3:52 PM

Gone Amish?
I am from a Mennonite family and I too would have questioned black and purple. There is a whole other spectrum out there, but darn they do look good together!

LOL! That's so funny! Sounds like my brother and sil. My sil is an avid Florida State Seminoles fan and just to aggravate her, my brother cheers for the Florida Gators. Hmmm... you just gave me an idea for a quilt. ;-)

So funny... when I added the purple, I told my youngest daughter, "This looks like an Amish afghan", and she agreed!

Oh, yes, very Amish! It is so striking together, though!

What a special gift for him!

I didn't even think of Amish when I saw it! LOL! And I live right next to them!

I LOVE those colors together. It's going to be beautiful.

ha. I though Amish right away. But I love your photo- makes it very enticing. And I enjoyed the story behind it too :)