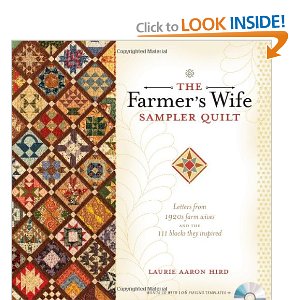 "The perception that city dwellers had of farm women in the 1920s was generally not favorable. It was commonly believed that the farm wife was a drudge and a slave, miserable with her life, and anxious- if not determined- to see her daughter escape from the farm when she was grown. The Farmer's Wife, a popular women's magazine of the day, with 750,000 subscribers, believed that this was far from the truth.

In January 1922, the editors of the magazine asked their readers the following question: "If you had a daughter of marriageable age, would you, in the light of your own experience, want her to marry a farmer?"

Laurie Aaron Hird, The Farmer's Wife Sampler Quilt
The book is a series of letters received from actual farm wives in answer to a contest held by the magazine. The author made a sampler quilt to accompany the letters, and my friend Mary Lou is teaching a class in which we make the same sampler quilt. Autumn and I are taking the class together along with a group of ladies from our quilt club. This month we tackled 11 blocks, and I enjoyed it immensely. Having finished the last of my first 11 blocks over the weekend, I can't wait for our next class. 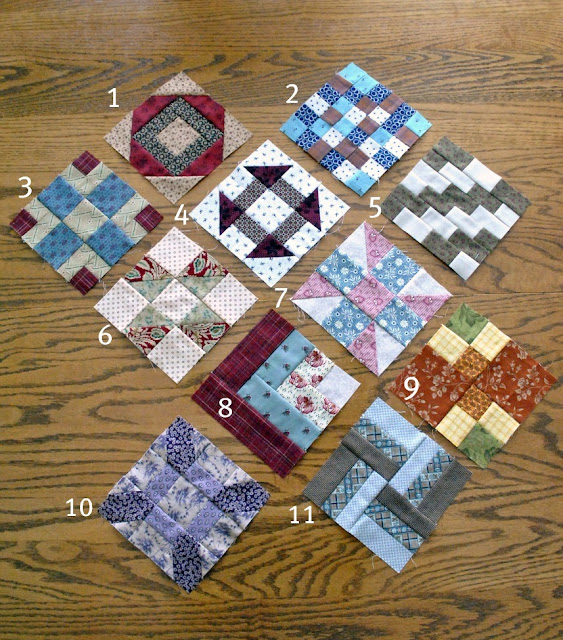 My fabrics are Civil War reproduction fabrics, while Autumn chose to do hers in fabrics from the 1930s.

Have a favorite?
Edited to add: I thought you might enjoy seeing Autumn's blocks, too! 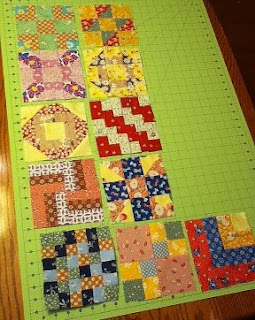 They are all just beautiful!

Are you hand or machine stitching? My mom always hand stitched hers (piecing and quilting) and that idea keeps me from trying quilting.

Churn dash caught my eye. I like the pattern and the contrast. Not being a quilter I truly admire the patience and precision of those who are.

I'm machine stitching them, Karen. The author of this book specifically talks about how women embraced new things that would make their lives easier such as sewing machines. I think you ought to keep that in mind, and give quilting a try!

I enjoyed reading the history behind this quilt, and block #6 made me giggle - "A contrary wife" LOL!
Beautiful work! I can't wait to see your and Autumn's finished quilt. I can see the similarities in the blocks, but I think they will look incredibly different when completed.
How fun!!!!

Your blocks are beautiful, Tracy!! You've managed to use the darker pallette Civil War Repros without them looking too somber or, indeed, dark! :-D Very, very nice!! My favorite is the Churn Dash -- I've always loved the lines of that block and will (Lord willing, someday! LOL) make a whole quilt of just that block!! I've got the next batch ready -- you'll be hearing from me soon with cutting instructions!
Blessings,
Mary Lou

They all look great! The Churn Dash caught my eye first. I really like Autumns Streak of Lightning too!

I can't pick a favorite! I love what you both are doing and how different they look with the difference in fabrics!

You are making me want to do a regular quilt...

i absolutely love the variation!
such geometry - and beauty. :o)

The Churn Dash is always one of my favourite, but all your blocks are beautiful.

I did a similar kind of class two years ago called Ye Olde Sampler. I adored the making of it and I think the finished product is stunning. I just need to get it quilted.

I really love these especially the Kitchen Wood box and Rainbow flowers. Autumn did such a great job on her squares! Can't wait to see the finished quilt.
Patricia

So pretty! I can't wait to see some more, and I love the 2 different eras you and Autumn chose fabrics from. Its amazing how much that changes the whole look of the quilt, just in fabric choices.
I just ordered this book in from the library, having seen it over the weekend at Joanne Fabrics. They had The Farmers Wife cookbooks too, but our library doesn't seem to have those :o(

They are amazing, Tracy! Wonderful details. I love to quilt, but those look daunting!

What a fun mother-daughter project, Tracy! I really enjoyed seeing the contrast in fabrics between the time eras. Fabrics fascinate me ... I'm all for framing them as pictures.

A little off topic (and I hope I haven't mentioned it before), but you would probably really enjoy Little House in the Ozarks, a collection of non-fiction essays by Laura Ingalls from the "farmer's wife" perspective. I don't agree with all she says, but much of it is very sensible. It's a good read.

Girls, the blocks are gorgeous....so proud of both of you.
Paula